We have a very good record at the Eddie Wright Raceway, and the way we started in this traditional Bank Holiday Monday match there seemed no doubt we were going to sweep all before us.

It’s never sensible to take too much for granted though. We stormed from the gate to take the first two heats 5-1, and nearly added a third – we were on a 5-1 in heat 3 but Max in trying to team ride with Derek was just pipped for second.

We swapped 4-2s before Ryan Douglas took a TR, but it was David Howe who won the heat with Sam Masters second, so we conceded only a 5-2.

Things went a bit awry over the next three heats though, as the home team gated and pulled back a further 8 points, leading 28-27 at heat 9.

There’s always a chance with Cook in the final two heats though. He won heat 13 with apparently a flying start, according to those near the starting gate. Sam kept David Howe at the back so again we had gone a point in front.

Derek knew heat 14 was crucial and made a good start, though Birks took him on the outside. Jorgensen held third till the last lap but Steve picked up the important point with a late pass, to leave us a point up. The old familiar situation of needing a Cook win for the match!

Could he take the pressure again? Yes, no bother, he was away and clear, and a bonus was a great ride from Max, cutting back past Auty and Douglas and getting the better of them for a closing 5-1.

It was another nerve-wracking match but once again the whole team contributed to an excellent result. 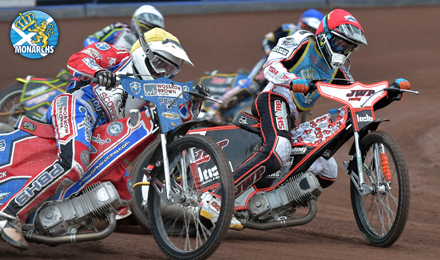 The Scotwaste Monarchs make another attempt to open their away Premier League campaign with a match at the Eddie Wright Raceway in Scunthorpe on Monday afternoon.

After their big win on Friday night the Scotwaste Monarchs travel to Scunthorpe hoping to pick up at least one of the four Premier League points on offer. Once again Scunthorpe have named a guest or rider replacement at number one and have not yet confirmed which option they will choose. However, the will have Thomas Jorgensen back from the Danish Championship at reserve and he will be a powerful opponent in that position.

The Scotwaste Monarchs are unchanged from Friday and all the riders came through their meetings on Saturday evening without any problem.

The Scorpions have had mixed fortunes at home so far this year but having gradually been improving with their biggest win at home coming last week against Plymouth, a match they won by nine points. They have won 3 and lost 2 so far this season at home.

Stevie Worrall will be hoping for a quick meeting as he is due at Swindon at half past seven for an Elite League match. It is almost 200 miles from Scunthorpe to Swindon!

The Scotwaste Monarchs duly equalled their all-time club record with a tenth successive win, a truly hard-fought one in a nail-biting match at Scunthorpe, with a final score of 48-43.