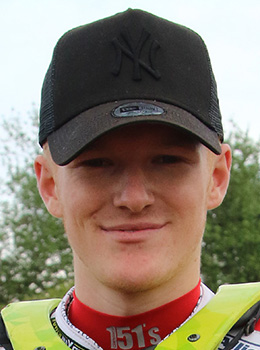 Anders Rowe joins the Monarchs from the start of September after being released by Redcar, something they probably did with reluctance as Anders has had a good season so far.

He had a sensational start to the season, which he put down to having raced in Poland during 2020, gaining experience and confidence. He returned several double figure scores in the Premiership.

He injured his knee at King’s Lynn and missed much of July, following which he has gradually been regaining his confidence though still scoring well enough for Redcar and Ipswich.

He spent three years from 2017 with Kent in the National League, then moved to Somerset. He won the National League Riders Championship in 2019, and was a British Finalist this year. He scored 6+1 on his visit with Redcar in May, leading Sam Masters to the final turn!

He says “After Sam Masters beat me in that race, right away he explained to me what I had done wrong! It will be cool to ride with him. Sam doesn't stay with Edinburgh so long for no reason. That's because it's a good club."