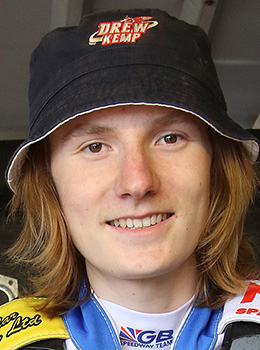 Monarchs have signed their third Rising Star of the season, 19 year old Drew Kemp who was runner-up in the British Under-21 Championship at Redcar this season.

Drew has come available thanks to the regrettable demise of Eastbourne, leaving him without a Championship club. He still races for Ipswich in the Premiership.

Of course he has ridden in the same position as a guest this season, scoring 8 in the early season win at Berwick but not managing a point at Armadale last week. He said “Although I didn’t go too well riding as a guest last week, I felt I learnt a lot and it’s a track that I can definitely improve on. It’s good to go to a team which could win something this year and I hope I can add something to the team.”

His first clubs were Ipswich and Mildenhall in 2018, and he has since then been regarded as one of the top British prospects. He does quite a lot of riding overseas and hopes to learn from the experienced members of the Monarchs’ team. He said “Sam Masters was helping me last week even though I wasn’t a member of the team then.”

He admits to preferring big fast tracks but chose first Eastbourne and now Armadale this season to help him learn the smaller ones.