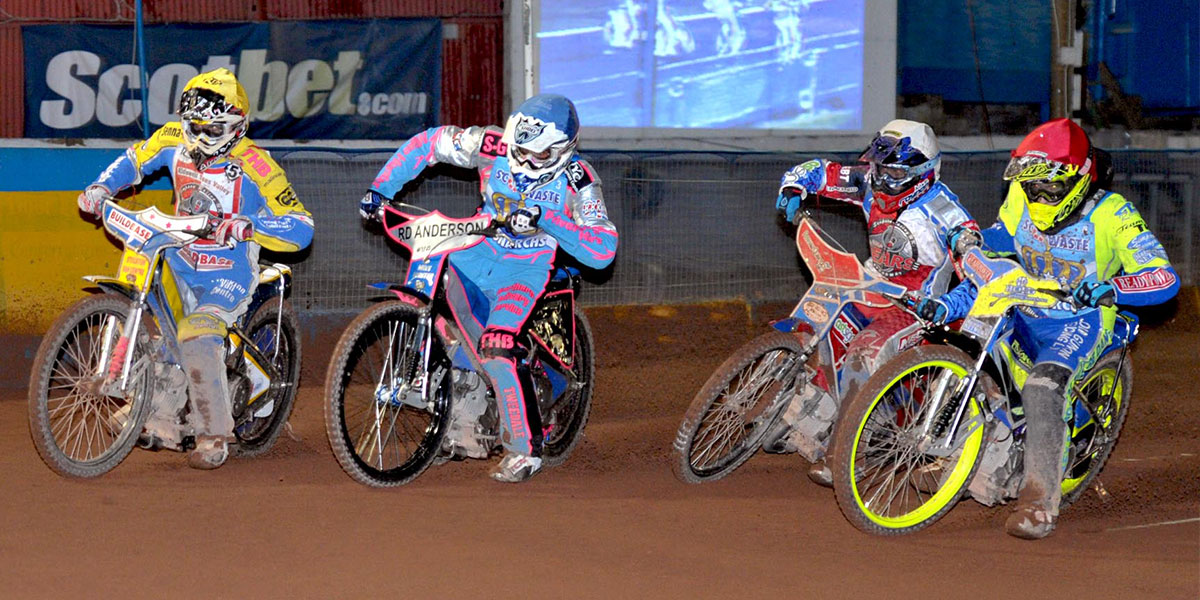 Redcar seemed to have the personnel to push the Scotwaste Monarchs close, but that didn't prove to be the case as Monarchs cruised to a comfortable victory.

The Bears didn't have much luck, certainly - Jason Lyons stopped while leading heat 11, and Matej Kus also ran into problems while ahead of the following race, although these two were off the pace in their other outings.

Gary Havelock too has had many better days, and his modest score of 6 was boosted by a TR 4 pointer.

Aaron Summers (using a Havvy engine) was quite brilliant and even won heat 15 after losing his footrest, and there was some exciting riding from Adam Roynon at reserve which suggests that he is in for a good year.

Both Peter Juul Larsen and Robert Branford had some good moments and these two youngsters will be worth watching in the months ahead.

The home side were pleasingly solid with Andrew Tully having his best match of the season, even gating pretty well. There were race wins for six of the side and a very good showing for guest reserve Simon Lambert who was involved in some of the best racing.

Overall the racing did not come up to the standard of the previous week.

Monarchs were off to a strong start with a comfortable 5-1, set up by a powerful drive into the first corner by Wolbert blocking any attempted run round the outside by Jason Lyons.

Robert Branford was the early leader of heat 2 but Simon Lambert moved ahead of Adam Roynon. Not content with that our guest gradually moved in on Branford and eventually squeezed inside to edge ahead, with Branford swinging too wide and coming off.

Matej Kus had an unfortunate introduction to Armadale when he spun off on the first corner of heat 3. He was quickly off as the others sped away with the Monarchs' pair leading. On the pits bend of lap two Gary Havelock also fell, taking ages to clear the track.

The race was stopped and unless the rule has changed in this year's book, common sense over-ruled legality as a 5-0 was awarded.

At 14-3 it was already looking as if Redcar were not going to put in the expected challenge. However Aaron Summers looked superb in heat 4, rounding Kalle on the first corner and winning by miles. He clearly was going to be a threat.

A hard first turn by Tully in heat 5 left Lyons stranded out at the fence, and Jason pulled on to the centre as Monarchs sped to another 5-1. 22-7.

Things took a different turn in the next one though - Summers was away again, and this time he was backed up by Adam Roynon. Wolbert kept on his tail throughout but though he was close several times he could not squeeze past.

The TR had been held back for Havvy in heat 7, presumably targeting Kalle, but the Finn was away fast to restrict the damage to 4-4, with Ashley Morris easily heading the struggling Kus.

Aaron took his TR in heat 9 but this time Andrew Tully got an excellent start from gate 4 and eased round the outside to lead. Aaron kept up the chase and there was a good battle too between Cook and Roynon for the point, also going to our man.

Havelock and Kus were well back again as our opening pair notched another easy 5 in heat 10.

Jason Lyons finally came to life to lead heat 11, and he looked set for a win over Kalle until he shed a chain late in the heat. Larsen rode well in this one to keep Kalle under pressure but it was a lucky win for our no. 5.

The next heat was a good one and looked like going against us. Kus led the race with Roynon second and Tully trying to squeeze under him. Andrew got into second but then turned too tight trying to catch Kus, letting Roynon come back round him.

Then Kus hit trouble on the last ap, drifting wide and pulling up, so it was a shared heat.

Summers won again in heat 13 in spite of a big effort by Wolbert, but Katajisto trailed badly.

Craig Cook took a good win from heat 14 and lined up for the last race with his regular partner Tully against Summers and Roynon.

It was a good heat with Summers leading, challenged hard first by Cook and then Tully. He held on though, and it transpired that he had lost his footrest at the start of the race! Rather than a good win, that made it a brilliant win as Aaron showed just what a talented rider he is.

Edinburgh will hope to get their defence of the Premier League title off with an emphatic result at Armadale this Friday (7.30) when the Redcar Bears come north, fresh from a home match the night before against Scunthorpe.

This will be Edinburgh's fourth match of the new season, having been involved in three very close results against strong opposition already. The Bears on the other hand will be racing their sixth match in fifteen days, with a win and three defeats before Thursday.

And after finishing stone last by a long way in last year's Premier League Championship, it's a vastly different Bears that will line up on parade on Friday. Of the thirteen different riders who wore the Redcar colours last year, only Gary Havelock and Peter Jull Larsen are retained.

Coming in at No.1 is the 40-year-old star rider, Jason Lyons, who was the biggest casualty of Birmingham's decision to step up into the Elite League. The vastly experienced Australian had become a fixture in the Brummies side over the past four years since they returned to speedway.

Returning at No.2 is 19-year-old Peter Jull who rode only 10 matches for the Bears in 2010, but scored 46 points which was enough to convince the Redcar promotion that there may be better things to come. By an odd coincidence, both Lyons and Jull began their UK careers with Glasgow.

Next up at No.3 is another rider who made his name four years ago at Glasgow when suffering concussion while riding for Berwick and allegedly speaking perfect English for the first time. It's 21-year-old Czech rider Matej Kus who has recorded some big scores already this year.

At No.4 is the Redcar skipper, 42-year-old Gary Havelock who amazingly began his career at Middlesbrough more than a quarter of a century ago. And while it may be 19 years since he stood at the top of the World Championship rostrum, Gary is still a formidable opponent.

Aaron 'Spud' Summers makes a welcome return to Armadale, this time at No.5 for the Bears, having been a second casualty of Birmingham's surprise step up. The former Monarch has been having a few bike troubles of late which was something that dogged his time in the blue and gold.

Amazingly it will soon be eight years since Redcar's new No.6, Adam Roynon rode his one and only match for the Dale Devils. In that time he has ridden for fourteen different teams as he has gone from one injury to another. But he has never lost his desire to make it in this dangerous sport and he may at last have an excellent chance to rebuild his career.

At No.7 is the young Australian Robert Branford who so impressed the travelling Monarchs' fans when he guested for Edinburgh at Newcastle last Sunday. Robert tasted great success in his first season last year when Buxton did the treble of National Trophy, KO Cup and League.

The Monarchs riders have taken time to wake from their winter slumbers but their three tough matches so far should have stood them in good stead. Redcar are no pushovers this year so this will be a good early test of whether Edinburgh are to be title contenders once again.

If Monarchs can match the Bears in getting out of the starts quickly, they should make home advantage count. But if they don't, just like last week it should make for some fabulous speedway action. Be there at 7.30 when the tapes go up on the 2011 Premier League season.

The Scotwaste Monarchs won more comfortably than expected against Redcar in their opening Premier League match, finishing 56-37 ahead in spite of a brilliant 16 points by Aaron Summers.