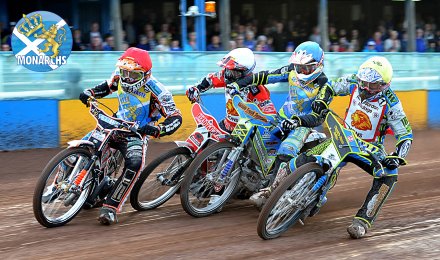 The Scotwaste Monarchs beat Leicester tonight 52-37 and landed three league points, moving up to fourth place with matches in hand over the teams above them – but in reality it was nothing like as easy as the score suggests!

Leicester had led by 4 points at heat 9, and even after the match Craig Cook said "I honestly thought we had just nicked it by a few points, I never thought it would be that big a scoreline."

Monarchs actually finished with three 5-1s, though in heat 14 this was due to Kevin Doolan stopping while leading. In heats 13 and 15, Craig Cook and Claus Vissing picked up maximum advantages over Nieminen and North, and it was to these two plus Theo Pijper that Monarchs looked to for the bulk of their scoring.

In fact other than junior Tommy Fenwick (who did a decent job without scoring), all the home men scored at least 6, and yet nobody was completely at ease on a night when gating was all-important.

After a discussion over current rules, it was decided that Dakota North was eligible (on his 2012 Premier League average) to guest for Magnus Karlsson, so Leicester were able to use rider replacement for Lasse Bjerre and give all their main men an extra ride. Unfortunately for them this only raised 3 points.

Where the Lions did score heavily was at reserve, where Robert Branford and guest Adam Ellis (back next week with Ipswich) were very impressive.

Kauko Nieminen won heat 1, the visiting reserves took 5 in heat 2 and the Lions were 4 ahead by heat 9. In the next race, Monarchs took the lead!

A 5-0 looks like good fortune, but actually the key element was a good gate by Derek Sneddon. Craig Cook and Nieminen battled for second, and you had to fancy Craig to get the better of things there, but Kauko packed up in any case. Kevin Doolan had already retired so a likely 5-1 became a 5-0.

Monarchs looked strong over the closing heats, especially with Monarch of the Match Claus Vissing having his best meeting to date. The Lions heat leaders faded and hence we arrived at that unlikely final scoreline.

Leicester return to Armadale on Friday as league leaders, looking to add to recent away wins at Glasgow, Plymouth and Sheffield, but while the Monarchs are seven points behind in fifth place, they also have five matches in hand.

So while this may look to be another potential 'banana skin' fixture for Monarchs after their unexpected home defeats, the blue and gold brigade look to be coming on strong again and have already beaten Leicester very convincingly at the start of the season.

Craig Cook is piling up almost as many points in the Elite League these days as he is doing for Monarchs in the Premier League. Once again he faces the Lions' captain at No.1, Kauko Nieminen from Finland who is best remembered in these parts from his spells with Glasgow and Workington.

Edinburgh's captain, Derek Sneddon's luck and his scores have been improving and he will be looking for this to continue when he lines up against the ever-present in the Leicester line-up, Jan Graversen from Denmark who is averaging around five-and-a-half points per match which is only good enough for seventh in the Leicester charts!

A very much battered and bruised Theo Pijper who has been so crucial to Edinburgh's successes this year moves back to No.3 where he faces the Australian star of many former clubs, Kevin Doolan who was riding at No.4 against Max Fricke on his previous visit to the Scotwaste Arena. How things change!

The battling Hungarian, Jozsef Tabaka makes a welcome return after injury for Monarchs at No.4 where his sensational scoring power will be put to the test against any four of the visiting riders who operate rider replacement for Lasse Bjerre who is away on international U-21 duty.

There's an all-Scandinavian look at No.5 where the fiercely intense Claus Vissing from Denmark, who has thankfully found his scoring touch again, lines up opposite the one-time Monarch, Magnus Karlsson from Sweden who was brought in to replace the injured Adam Roynon temporarily and has been retained.

Both sides have completely different line-ups at reserve since their April clash. Edinburgh give a first-ever outing to regular second half junior, Tommy Fenwick while Leicester will track Alex Edberg at No.6 if he has recovered from a foot injury, a rider with an average of over six-and-a-half points.

Then at No.7, Max Fricke continues his steady and highly impressive upward progress where he is beginning to match Jozsef Tabaka's previous reserve power. His opposite number is another young Australian rider, Robert Branford, the son of a one-time Monarch, Robert Branford.

Leicester have if anything a stronger side than the one that faced Monarchs earlier in the year. They don't have a No.1 in the style of Edinburgh but they have a couple of riders who have filled the No.1 spots with previous clubs and they have solid scoring ability right throughout the side.

They may suffer slightly from the absence of Bjerre and it will be a blow if Alex Edberg doesn't recover in time. Equally, Monarchs have Theo Pijper still carrying a significant injury and have a very inexperienced guest reserve who can't be expected to contribute much on his Premier League debut.

This match will be a very telling one in terms of the fortunes of both clubs. A win for Monarchs will begin to cement their place in the top six and boost their hopes of taking the title. A win for Leicester would lay down a marker that they are more than capable of hanging on to their current top spot.

Monarchs should start favourites for this one but they can't afford any slip-ups. They have a team packed with entertaining riders who are a joy to watch each week and who could really hit the heights if everything goes their way. If you agree, then make sure to be in your regular Friday night spot to cheer on your heroes. Tapes up 7.30.

We'll have a few more Lions to join Ed at Armadale on Friday night but Leicester will not arrive as league leaders as the result at Redcar on Thursday night means that Workington are now top of the league with a 49 to 41 win at Redcar. The Comets are now the only team in the league to have won all their home matches.

Leicester Lions make their second visit of the season to Armadale this Friday, this time as league leaders looking for points.