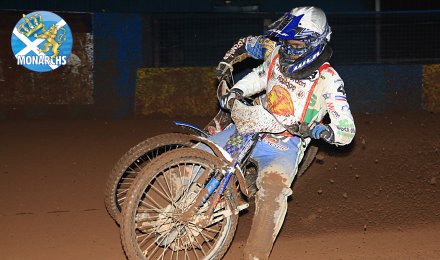 Leicester Lions make their second visit of the season to Armadale this Friday, this time as league leaders looking for points.

In April, the Scotwaste Monarchs knocked them out of the KO Cup, but since then the Lions have been pretty successful with three away wins. They did lose their first home match last Saturday to Somerset, a similar match to Monarchs' own 1-point home loss to Redcar with three TR points being the vital factor. Monarchs welcome back Jozsef Tabaka after his mercifully short absence and look to keep the form of last Friday going as they move up the league.

TEAM NEWS: On the home side, to confirm yesterday's website announcement, we are happy to welcome back key man Jozsef Tabaka after his foot injury. His has been a shorter absence than first feared. He partners Theo Pijper who swaps numbers again with Claus Vissing.

Mitchell Davey will be another week at least on the sidelines. He will be replaced on Friday by a Scot – Tommy Fenwick has been practising in Armadale second halves and making occasional appearances for Coventry in the National League, but this week he gets a Premier outing.

There's no denying this is partly due to problems in booking a higher scoring NL guest (all that is permitted for the absence of a no. 7) but Tommy will give it his all and gain valuable experience.

On the Leicester side, Lasse Bjerre will be on his way to Pila for the first round of the World Under-21 Championship, so the Lions will operate rider replacement for him. This allows an additional ride for all of his team mates so should not weaken the Lions at all.

THE BEACH PARTY: A reminder that it is Beach Party night at Armadale on Friday!

Gates are opening slightly earlier on Friday to allow all those dressed in beach party outfits to join the Scotwaste Monarchs on their desert island to have their photograph taken under the palm tree, before 6.45pm. Everyone who gets in the beach party swing of things will receive a £2 off voucher for the Scotwaste Monarchs League Cup semi-final clash with Ipswich on 5th July.

All school children (up to 18) are to be admitted free.

MATCH SPONSORS: It's always a pleasure to welcome Scotwaste to Armadale as meeting sponsors as well as their usual role as team sponsors.

PLAYOFF CONTENDERS: Leicester are still League leaders in spite of losing at home last Saturday, and are certainly strong contenders for a Playoff place. There are at least 7 sides realistically chasing the 6 Playoff slots which will decide the title, so no-one wants to slip up (only Redcar and Workington now have 100% home records).

The Lions still have a strong Scandinavian flavour even in the absence of Bjerre, with the popular duo of Kauko Nieminen (Finland) and Magnus Karlsson (Sweden) leading the team. They have Dane Jan Graversen and Swede Alex Edberg in the backup crew, not forgetting of course the always-useful Aussie Kevin Doolan.

With Monarchs weakened at reserve, Robert Branford the (Australian) British Under-21 Champion could be a key rider.

LAST MEETING: Monarchs returned at last to winning form at home when they easily beat Workington 61-34 in what had been expected to be a close match. Both Craig Cook and Max Fricke scored 14 points.

NEXT MEETING: The Scotwaste Monarchs continue their attempt to win the League Cup when they take on Ipswich Witches in the first leg of the League Cup semi-final on Friday 5th July at Armadale.