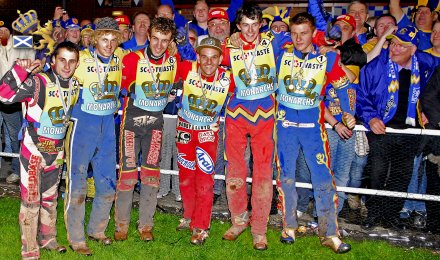 A GREAT NIGHT AT PERRY BARR

It's a safe bet that every Monarchs' fan who attended Perry Barr on Sunday for the Premier Trophy Final second leg will remember it as one of the best nights of their Speedway lives.

It wasn't just that we won the Premier Trophy ? that was no great surprise after all. It was the whole atmosphere of the night, the friendliness between the fans and the riders and also of course the very high standard of entertainment that was on offer.

The fact that Birmingham had beaten Somerset the week before, thereby ensuring that Monarchs won the 2008 Premier League, was the starting point.

We went down there with the intention of saying thanks to the Brummies, and in turn they were able to take pride (especially after the unlucky season they have had) in their achievement in gaining such an important result. Craig Watson, in form in recent matches, said afterwards ?We wanted to beat Somerset for ourselves of course, but we were happy to do it for you guys.?

The mood was set early as the teams walked the track pre-meeting, and the Monarchs' fans chanted ?There's only one Jason Lyons!? in recognition of the great maximum scored by the Aussie in the Somerset match.

The travelling support was huge and the Birmingham promotion must have been delighted to see so many for an event which, coming between two Wednesday matches, may not have been especially well supported by the local fans.

The next remarkable feature was that Monarchs' fans started buying Birmingham scarves, and actually wearing them during the match. They bought them in such numbers that the scarves sold out before the end of the night ? a rare but understandable misjudgement by souvenir guru Nick Barber.

We had some Scottish-themed music playing over the tannoy, and that included "The Black Bear" downloaded from Graeme Campbell's phone!

It was a great match too. Monarchs had been a bit below par over the two legs of the cup tie against Workington, but both William Lawson and Aaron Summers found their form right from the off ? William won heat 1 after steaming past Watson, and later defeated Jason Lyons, while Aaron weaved through the field for a paid win in heat 2 and also won his final heat to make victory certain.

So it was another great team show, though the standout performance was from Ryan Fisher. 17 of the best, with two heats against Jason Lyons which will go in to the memory banks of supporters as true classics.

In heat 9 Jason pulled off a superb last bend outside overtake, and in heat 15 he tried a cutback which just failed. Both heats were four laps of pulsating, enthralling, high class speedway.

Perry Barr is a great race track, and we saw it at its best on Sunday night.

During the trophy and medal presentation, the Monarchs' riders presented their counterparts in the Brummie team with a bottle of whisky and a haggis, as an appreciation of that Somerset result. Every rider was given a great reception, and the Monarchs' riders came over to shake hands with the supporters and enjoy the moment with them.

A great night indeed it was.