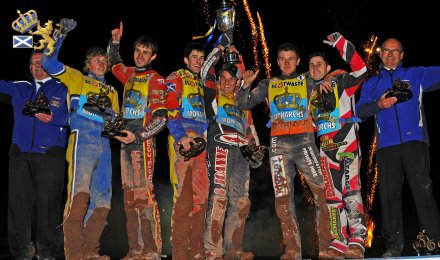 The League trophy is ours! Image Credit: Ron McNeil

The Scotwaste Monarchs were well beaten in the first leg of the Elite League playoff, going down 53-37 to Wolverhampton.

It was a wet and cold night, with the track very difficult after a day, indeed a week of much rain. There were huge puddles on the centre green though the track was just about rideable.

The Wolves adapted much better to the conditions and although Monarchs were just four points behind at heat 9, they then lost four successive 5-1s, not helped by falls from William Lawson (who was lying second on the last bend of heat 10) and Ryan Fisher (who was comfortably winning his tactical ride in heat 12).

Even though he lost an almost certain 6 points, Fisher still did extremely well to score 14 points.

Chris Schramm battled for his seven from reserve, winning heat 2, but the remaining Monarchs seemed to be rather below par, even allowing for the standard of opposition.

The second leg is at Wolverhampton on Monday but it is now a damage limitation exercise.

The disappointment of the result, which was not entirely unpredictable, was forgotten as Monarchs received their Premier League Championship trophy from Chris Van Straaten to great acclaim.