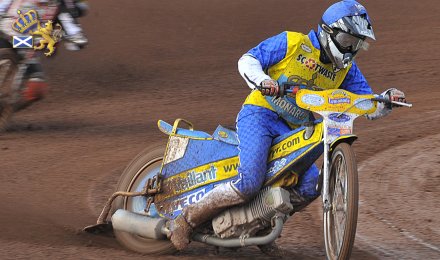 It's a big two weekends coming up for Aaron Summers as he attempts to make his mark back home before returning to take his place in the Scotwaste Monarchs' 2009 lineup.

Aaron will be 21 on 1st March and so this year is his last in the Under-21 ranks. Before competing in the Championship at that level he will contest the South Australian titles this Saturday at Gillman, where he had his best meeting in the recent Australian Championship.

Favourites for the SA Championship will be Elite Leaguers Rory Schlein, Troy Batchelor (the holder) and Cameron Woodward ? two ex-Monarchs there of course. The hope is that Aaron can feature high up in the next group which should include Tom Hedley, Robert Ksiezak, Arlo Bugeja, Justin Sedgemen (who made a good impression during the Aussie Final) and also Ryan Sedgemen.

There's another ex-Monarch in the field in Ben Shields, who hasn't ridden much since quitting UK Speedway in 2002. He is still only 27 but it would be a big step for him to return to the sport full time. Younger brother Kurt also rides in this meeting.

The following week it's on to Gosford for the Under-21s, perhaps a more important event for Aaron as he should be a potential winner. Chris Holder and Troy Batchelor have moved out of the Under-21 ranks which leaves a gap for other ambitious youngsters to move into. Aaron should be capable of challenging strongly.

His main rivals are likely to be:

DARCY WARD, the highly rated youngster about to race for King's Lynn.

RICHARD SWEETMAN who did well with the Isle of Wight last year and has now joined Birmingham.

TOM HEDLEY, impressive with Newport in 2007 but missed last season in the UK.

JUSTIN SEDGEMEN who impressed in the Aussie Final but who hasn't ridden in the UK.

Along with Aaron that makes 7 names leading the next wave for the Australians, and it would be a boost for Aaron to be right in the forefront.