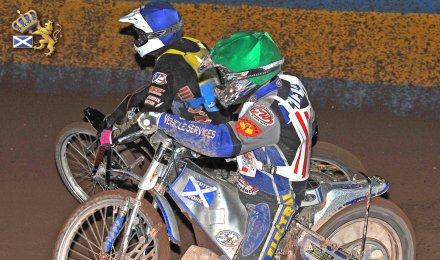 The weather was bad and the track was slippery, but this was a very satisfactory first night for the Scotwaste Monarchs who beat Glasgow 55-39 in the Spring Trophy first leg.

The biggest thrills came from Ryan Fisher's wins over Grieves and Parker in heats 13 and 15 ? but for the biggest successes of the night, look no further than the other end of the team. The three lowest average riders, Aaron Summers, Michal Rajkowski and Sean Stoddart totalled 29+4 points and all three were in excellent form.

As home debut scores go, paid 14 isn't too bad but Michal wasn't getting carried away. ?Track is OK, a bit slippery,? he said, and it looks like we have a winner there. The only point he dropped was to Parker after leading for a couple of laps.

Hermiston Monarch of the Match though was Aaron Summers who after a nightmare on Wednesday was completely solid and confident with four heat wins.

And Sean Stoddart bounced back after some poor matches so far to take two wins and play a big part in our success.

The downside was the struggles of Thomas who simply could not get round at all. We anticipate that being rectified shortly.

There were some exciting heats involving both Grieves and Parker but the younger Tigers were a little disappointing.

The track was shiny and slippery in the early heats, and we lost three heats running to slip from 9-3 to 15-14.

After that, we lost the two heats in which Tigers used TRs but otherwise won most of the races to finish with what looks like a handy lead for Sunday's second leg.

Ryan Fisher dropped a point in heat 1 when he lost it on the pits bend, but he finished the night with a sensational pass on James Grieves (heat 13) and a clever win over Parker (heat 15) who was pressing hard on an impressive outside line.

There was enough good racing to keep everyone happy and it looks like we are going to have a lot of Friday night fun once again.