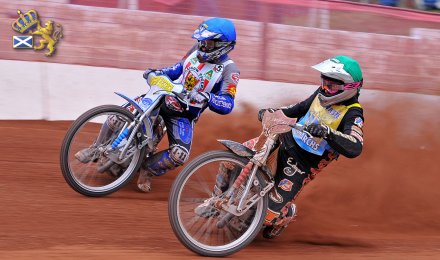 Our run of nine successive wins over Glasgow came to a resounding halt on Sunday as we not only lost the match at Ashfield but also the Spring Trophy on aggregate.

We might have one or two comments about the refereeing, we were missing Thomas and of course we threw a number of points away on Friday. But to be frank we performed poorly, especially in our usual problem area of gating, and could have few complaints that we lost on aggregate.

Supporters will be keen to hear from the Edinburgh management team exactly why Andrew Tully wasn't used as our second TR in heat 14 (when we were 15 points down). He wasn't having a good day but a TR is points for nothing basically, there is absolutely no reason not to use one when you are eligible to do so.

The fans were incredulous and the non-use of the TR drew a post-race comment from Michael Max who, like most in red-and-white, could hardly believe their luck. However as it turned out the two points we declined to collect would not have been enough for an aggregate win. Indeed we were fortunate that Andersen packed up at the start of heat 14 or we may not even have shared the heat.

The team tried hard enough, but the gating was poor and as ever that was a big handicap. We made such a poor start that we trailed 19-5 after four races, although an 8-1 in heat 5 brought us back into things.

Heats were generally though not entirely from the gate. Wethers and Andersen had a good tussle for second in heat 4, Fisher v Grieves in heat 11 was a goodie and so was heat 13 as Wethers jockeyed for position between Grieves and Parker.

Andrew Tully seemed unlucky to be excluded after Grajczonek came down in heat 3, and there was also an exclusion for Ryan Fisher who seemed to think that Shane Parker cut across him in heat 13 after passing.

But the bottom line is that our performance was poor and although the Spring Trophy may not be the biggest honour of the season, we certainly didn't go into it to lose. Now that we have, the riders must concentrate on a better level of performance, certainly in the away matches, at the earliest opportunity.