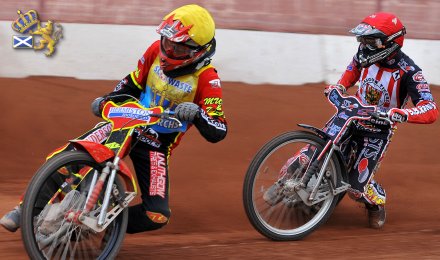 INTO THE PREMIER TROPHY

Monarchs go to Sheffield, then welcome the Yorkshire side to Armadale on Friday, and finally travel down the coast on Saturday to visit Berwick who have started well under their new promotion this year. Monarchs of course are the holders of the Premier Trophy but know very well that they will face a tough task to retain it ? if they needed a reality check then the aggregate loss to Glasgow last weekend provided it!

THOMAS BACK: Thomas H Jonasson made a bad start to his home season last Friday, and was away in Poland on Sunday so didn't have the chance to make amends.

Now he is determined to do so and has apologised for his performance on Friday. ?It will never happen again.? He will be in the lineup for this week's matches.

Supporters are not surprisingly unhappy that the young Swede has already missed a match, though in fact the club were well aware that he would not ride in Glasgow last Sunday. There was a mix-up on Friday when it was incorrectly believed that his Polish event had been cancelled.

There seem to be minimal fixture clashes for the remainder of the season, other than representative meetings at Under-21 and Grand Prix qualifying level which all outstanding young riders have to be involved in.

There may be those who remain sceptical so all eyes will be on Thomas from now on!

TROPHY SETUP: Monarchs compete in the northern section of the Premier Trophy against Berwick, Glasgow, Newcastle, Redcar, Sheffield and Workington.

They race home and away and the top two teams go into the semi-finals along with the top two from the southern section.

MEETING SPONSOR: Speedway's most successful fundraiser ever, the Monarchs Grand Draw, are sponsors of Friday's home match and they occasion will be used as a recruitment drive to boost the numbers currently involved in the draw.

TIGERS TIPPED FOR FOURTH: No-one would pretend that the correspondents of the Speedway Star have a good record in punditry, but they have predicted that Sheffield will come fourth in this year's PL (one place behind their prediction for Edinburgh!)

Certainly the Owlerton team are usually well placed and are invariably strong at home. They have a mixed record at Armadale but look sufficiently well-balanced to provide plenty of entertainment on Friday.

Ricky Ashworth will be on a high after scoring a brilliant 12 points in the Ben Fund Bonanza at his home circuit on Sunday.

The riders who have shown best form at Armadale though are probably Hawkins (who missed the whole of 2008), Parsons and young Josh Auty who is expected to flourish this season under the guidance of Eric Boocock, the Tigers' team manager.

LAST MEETING: Monarchs won their opening home match 55-39 against Glasgow, with Ryan Fisher and Michal Rajkowski in double figures. Glasgow though clinched aggregate victory with a 56-37 victory on Sunday.

NEXT MEETING: Next week's Armadale action is a potentially fascinating battle with Newcastle in the Premier Trophy. They are a strong looking side and include last year's Monarchs' captain Derek Sneddon.