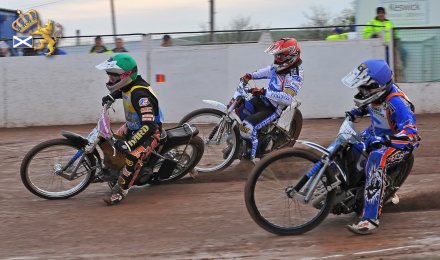 Our hopes of reaching the Premier Trophy semi finals are still on track after we became the first team to take a point at Workington, going down 48-42.

It could have been even better, had Aaron Summers got going at the start of the match rather than the middle, or perhaps if guest Richard Hall had made some better starts, but it was still a decent result.

As a meeting there was little to get excited about other than the score. We had three double figure riders, Fisher, Wethers and Rajkowski, and we took seven race wins on a track where the home heat leaders are supposed to dominate.

The new ruling which allows a guest for either rider when two are missing (rather than the lower as it used to be) worked in Comets' favour by permitting them the use of Tomas Topinka for Rymel.

We trailed by six after Richard Hall fell on the last corner of heat 7, but held it and then improved that position by taking 4-2 advantages in heats 11 and 12, Rajkowski doing especially well to head Topinka.

Although Doolan won heat 13 he made a bad error on the first corner by pushing partner Compton wide. That was shared, as was heat 14 when Rajkowski passed Richard Lawson, assisted perhaps by the steel shoe of the latter coming adrift.

A 5-1 would have won it or a 4-2 secured a draw, but we only needed a finisher to take a point and that's what we got. Fisher had been in second but he was robbed of that when Topinka lifted and careered across his path.

So we go to Newcastle well placed, but obviously a win there would be very much desired.