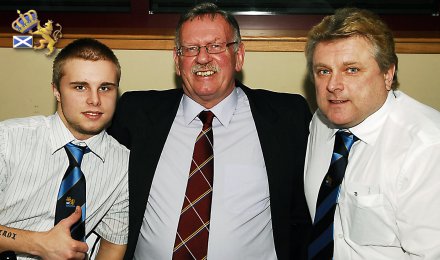 Monarchs scored a superb 47-41 away win at Redcar, but the success was overshadowed by the tragic news from Sweden that Thomas Jonasson's dad Michael died tonight.

Thomas received the dreadful news in a post-match phone call from his mother and was naturally distraught, and desperate to return to his family.

Michael Jonasson, who was 50, came over to the UK with Thomas when we first met them in January 2008, prior to Thomas agreeing to join Monarchs. He has since made many friends amongst Edinburgh's officials and fans and loved his trips to Scotland.

He was over for a pre-arranged holiday last weekend and stayed with Monarchs' Dennis Wallace, watching the team at Armadale and at Newcastle, even though Thomas had been ruled out after his Vetlanda crash the previous Tuesday.

Michael was the guiding force behind Thomas's career, arranging his contracts and sponsors. He took great pride in his son's achievements though he did talk last weekend of his concern for Thomas's health following his crash and his onerous travel programme.

He also often spoke of how much he and Thomas loved being part of the Edinburgh club, and had recently suggested that Thomas may well want to stay with Monarchs after this season even though most would have expected him to go to the Elite League. He greatly valued the personal relationships they had with many of us here.

Thomas was due to ride in an important Under-21 meeting at Eskilstuna on Saturday though at this point we don't know if he will want to compete, as no doubt his father would have wanted, or whether he will be too upset to ride.

Many of us will be deeply shocked and saddened by what has happened to someone who had become a good friend. We will be pledging every support to Thomas and his family in whatever way we can.