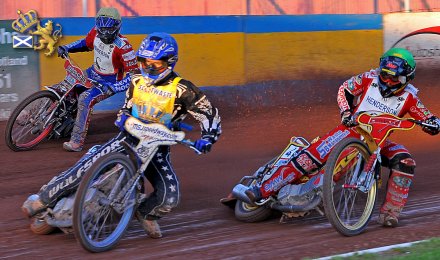 It was by no means easy, but Monarchs finished 11 points clear of Scunthorpe to take all three points from their first Premier League match of the season.

A magnificent performance by ex-Monarch Magnus Karlsson was the main obstacle. He won his first four heats, including a TR, but came to grief in the final race while battling for the lead with Andrew Tully.

Scunthorpe were stil in with a chance of taking a point from the match, needing a 5-1 to cut Monarchs' lead to 6. Ryan Fisher had seemed the most likely to split the Karlsson / Howe pairing but he came down at the first corner after collecting Magnus's front wheel.

However Andrew Tully flew at Karlsson and gave him a terrific battle for the opening lap and a half. He entered the pits turn the quicker of the two, Karlsson moved a little wider to find extra drive - but went too far, lifted and fell.

Tully deservedly took the rerun for a final score of 51-40.

Monarchs were not at their best though as usual there were points throughout the side. Matthew Wethers was a casualty, lifting and crashing at the start of heat 9 and injuring his hand.

After a last place in heat 11 Matthew pulled out of the meeting.

David Howe won his first two heats and looked as though he was on a par with Karlsson, but faded in the latter stages.

Carl Wilkinson was the only other Scunthorpe rider to win a heat.