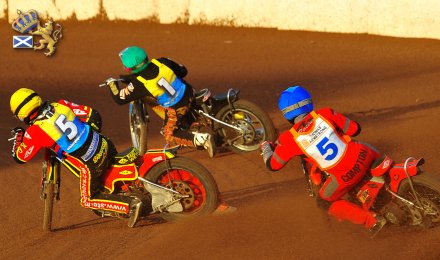 GREAT EFFORT PUTS US IN THE SEMIS

Brilliant riding by Ryan Fisher well backed up by Andrew Tully kept us on course for the Knockout Cup semi-finals, and when the others started chipping in towards the end we might even have won the match.

Fisher won his first five races with good starts and some strong first bend work. In Tully's case his gating was bad but he had inside lines on both bends which no-one else could find, and came from the back several times.

Elsewhere we were more patchy but finally Matthew Wethers and Michal Rajkowski contributed as we clinched our semi-final place by heat 12.

Amazingly heat 15 was our only race winner which wasn't Ryan Fisher! Andre Compton concentrated hard on ensuring Ryan couldn't get a run to the first turn, and this allowed Andrew at last to race away for an excellent win.

We were four down going in to the final heat so it stayed that way. Ryan decided to do a wheelie after the race, but flipped over the back, jumped up and punched the air.

He had done his job though and was involved in our three 5-1s in heats 1, 5 and 13, all with different partners.

Our semi-final opponents are Rye House