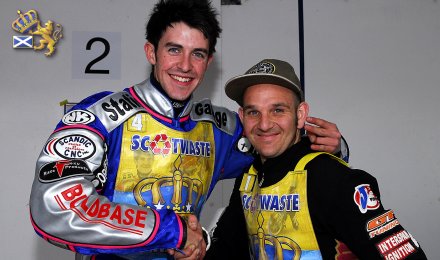 The great form of Ryan Fisher and Andrew Tully in last weekend's cup tie augurs well for their prospects in the Premier League Pairs at Somerset on Friday.

Fisher scored 30 points over the two legs, and Tully 24, both exceeding the total of any of the Comets' heat leaders.

Fisher's best run of the season so far has come at just the right time. "I was definitely pleased with how I went," he said, "especially Workington.

"I borrowed an engine from Glyn Taylor because I had blown my big track engine at Somerset, and it worked well.

"Swindon had got me one from Ashley Holloway but I tried it at Swindon and it wasn't working, so he's trying to sort that.

"I've also been seeing a sports psychologist who works with the whole Swindon team. He gives you things to think about before each race to put you in a positive frame of mind. It's hard to explain, but it seems to be working and I've been making better starts."

This will be the first appearance in the Pairs for Andrew who is making such exciting progress. He is no respecter of reputations and should give a good account of himself, especially if he gates.