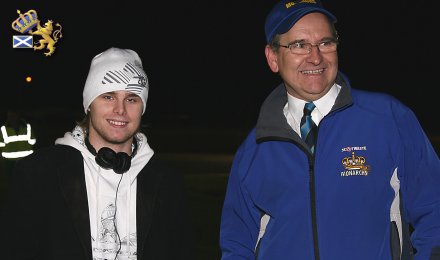 A WET AND DISAPPOINTING WEEKEND.

As he surveyed a very wet speedway track at the Scotwaste Arena John Campbell reflected on a very wet weekend of racing.

"It hasn't gone very well for us this weekend. Friday's meeting against King's Lynn was greatly affected by a torrential downpour in mid-afternoon. Unfortunately there is not a great of drying in the air at this time of the year and the track never really recovered from the heavy shower.

"That created a problem for us in getting the track ready for Saturday night's meeting but our fabulous track staff got everything cleaned up and back in place after a mammoth exercise from early Saturday morning. We seemed to be set for a great match on our re-laid track on Saturday night only for the heavens to open as the riders sat on their bikes in the pits ready to be pushed off for heat 1.

"I felt so sorry for everyone but especially for our track staff who had worked so hard to get the match on."

The Saturday rain was quickly rearranged for Sunday afternoon and with a better weather forecast hopes were high that the match could take place on Sunday.

"However, despite the conditions we were still keen to get the match on and it was only when I was on the track with Belle Vue team manager Chris Morton discussing the possibilities for the meeting and heavy rain began to fall we decided that we could go no further."

The meeting was quickly arranged for Friday 30 October to the exclusion of the Homecoming Scottish Open Championship, sponsored by Keyline.

John continued, "We had initial thoughts of trying to incorporate some kind of Open event within the Belle Vue meeting but we have spent many years building the Open into the prestigious event that it is and we don't want to devalue it in any way.

"It is, after all, the longest running individual championship in British Speedway history, despite claims to the contrary from the West Midlands of England, and we want to retain it as our premier event of the season. We will still end Friday's event with the massive fireworks display that was previously planned."

The 2009 Scottish Open will now be restaged on Friday 19 March 2010 as the opening event of Armadale Speedway's final season at its current location.

Supporters who have readmission tickets from Saturday can use them on Friday. Anyone who cannot attend on Friday should send their readmission ticket, together with their name and address to the Speedway Office at the Scotwaste Arena by 7 November 2009 for refund.

Anyone who has a readmission ticket from the Scottish Open and who now wishes to attend the Belle Vue match on Friday will be able to use that ticket and will also received a refund of the price differential.

Anyone who finds themselves with a readmission ticket from both rained off events should write their name and address on the Scottish Open ticket and a refund will be available from the Club Shop later in the evening. No one will miss out on gaining value for their ticket in some manner.