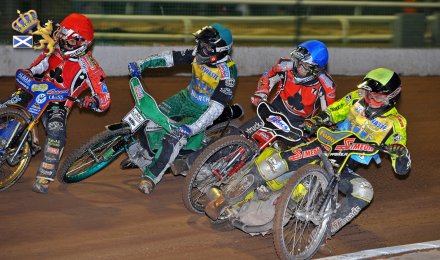 Kalle Katajisto raced into double figures with a great display, but we went down 59-32 in the first leg of the Elite Promotion Playoff at Kirkmanshulme Lane on Monday.

The young Finn was in great form on his first appearance at the track, and could have scored more had he not fallen while leading heat 4.

In fact Monarchs had three falls in the first four heats, which rather unsettled them. Ryan Fisher came down in second place early in heat 1, and Andrew Tully fell while chasing Hougaard hard in heat 3.

Then Kalle led Krzysztof Kasprzak, no less, and looked like winning heat 4, but he also slid off.

The track was rather difficult, possibly the legacy of a recent stock car event, and it was often wise to ride safely rather than bash the throttle. This doesn't suit all our riders, and several home men had problems also.

Neither Fisher nor Wolbert reached their usual standard though Kevin did win one race. Matthew Wethers made a slow start but became our second heat winner in heat 14, a race turned into a 5-1 when Katajisto also came from the back into second.

Kevin Wolbert lost a chain in the final race, and Patrick Hougaard was excluded for bringing down Wethers.

The second leg takes place at Armadale on Friday and the team will do their best to make some inroads into the 28-point deficit.