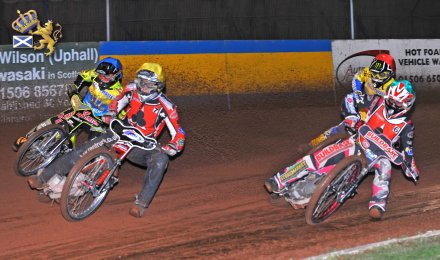 No-one could possibly have predicted how badly we would be beaten on our final night, a night when everything went wrong for the no. 2 team in the Premier League.

Let's be clear about one thing - nothing we say should take anything away from Belle Vue who were massively superior.

Krzysztof Kasprak was just about the best visitor we have ever seen, and the talented Patrick Hougaard was just behind him. Kasprzak, World Cup winner, was (incredibly) just outside the track record in heat 1 in the dreadful conditions!

The remainder of their side was not quite in the same class but had little difficulty feeding off the carcass of Monarchs' hopes.

Having said all that, our luck was unbelievably bad. We started without high scorer Wolbert and top gater Rajkowski, and lost recent super-reserve Kalle Katajisto in heat 2.

Meanwhile, Ryan Fisher had blown a motor while second in heat 1. Andrew Tully rode two unimpressive heats and then pulled out with neck problems, a legacy of the injuries which have never left him alone since early season.

So now - we had Fisher on his second motor, captain Wethers, guest Harrison and reserve Summers. Ryan met Kasprzak in heats 1, 6 and 13 and Hougaard in heat 10.

We had to run three successive heats with just one rider, and only put two riders out in heat 14 because ref Tony Steel allowed Aaron to have 8 rides!

Matthew had some good moments and Rusty put everything into doing his best for us, after his late call-up. Ryan blew another motor in heat 15, after breaking the tapes then trying hard to come off 15 metres.

It was the biggest home defeat in Monarchs' history and not a night we would recall with any fondness at all. The good points - the riders each got a big cheer during the end of season speeches, and the fireworks were well received.

Could it have been much different on a dry track with a full Monarchs' team? Who knows, maybe not that much different. Do the promoters need to rethink a system which gives so much advantage to the Elite team (including the system of choosing guests)? Yes.