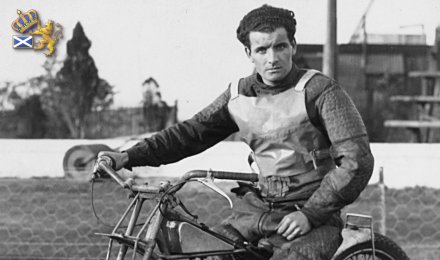 Eddie Lack, one of the great figures of our early days in 1948-54, died last week in Manchester Royal Infirmary. He was 87 and was believed to be the oldest surviving Monarch.

Eddie rode throughout the 1948-54 period and competed in 200 league matches for us, making him 11th in our list of matches ridden. He was 15th in our points list with 1226 points.

He also became team manager during 1953 while still riding.

A Londoner, he was a highly popular club man throughout this time, and was also notable in Edinburgh for opening a toy shop in Haddington Place.

He had ridden pre-war at West Ham, and also for Glasgow before becoming one of the original Monarchs' team in 1948. After the sudden closure of Old Meadowbank in 1954, for which match he wrote the programme editorial, he briefly rode for Weymouth.

After he stopped riding he was involved in track preparation and team management down south.

Unfortunately we did not manage to contact him for our Diamond Jubilee last year, and we thought he might have passed on at that point. We have sent a message for Eddie's funeral which is to be held this Friday (27th).