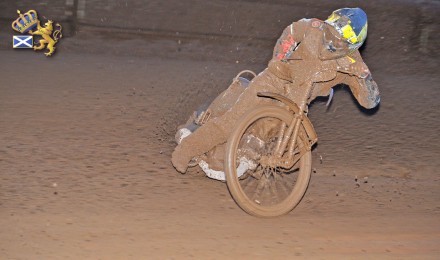 Mixed fortunes at the Cracker

On the plus side, our Hungarian new boy Jozsef Tabaka made a solid British debut. You have to be keen to come all that way and take five rides on a dark, wet and cold UK December afternoon, but he took it in his stride and scored 8 points.

He started with two thirds but they were encouraging rides in which he chased hard and attacked the track. He then won heat 9, making the gate twice off gate 2 with the first running stopped when Ben Barker fell at the first turn.

Joszef's last two rides were careful rather than spectacular as he saw out the day without mishap - unlike most of the other competitors. Jozsef just missed the semi by a point.

He said "I have not raced for a month, and by the end my hands were very cold! I was quite happy though."

For Andrew Tully on a track he loves (usually), it was the proverbial day to forget. He burst through the tapes in his first ride, and fell three times thereafter.

He was in front when he fell in heat 15, with Chris Mills doing well to miss him and also falling. Mills was rewarded not with an awarded win which he should have had, but by the race continuing and Luke Bowen taking the three points.

Conditions ensured that most races were decided by the second bend, though there were one or two good tussles. Jerran Hart was a revelation, starting with four race wins including a defeat of Doolan. But when the Scunny reserve was only third in his final heat, this let Doolan finish as top scorer by passing Frampton brilliantly in his last ride.

The actual meeting winner was decided using the semi-final and final method with Doolan taking the last race from Hart.

Scunthorpe's hard work was rewarded with an excellent crowd and most people went home happy, though maybe not the several blown engine victims or even exciting Ben Barker whose bike went spectacularly on fire just before the final.