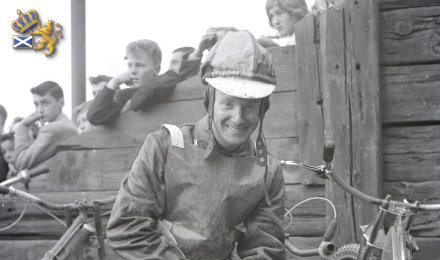 Sad news which comes to us today via the Glasgow Speedway website is that former Glasgow and Edinburgh rider Jack ?Red' Monteith has died.

Red rode for both Monarchs and Tigers in his time, during a career in which he didn't hit the big time but gave plenty of entertainment.

He was born in Paisley on 2nd July 1931 and came from a Speedway family, his father John having ridden in 1928. He started watching the sport at White City in 1945 and was successful in Cycle Speedway before taking up the motorised version.

He first rode in 1949 and continued to compete at White City until 1954, and again in the open season of 1956. He rode at Motherwell in the brief 1958 reopening, then dropped out of the sport till 1962 at Old Meadowbank.

His three league matches for Monarchs came in 1963, the highlight being a match-winning 6 paid 8 against Newcastle in June.

When Glasgow reopened in 1964 he became a Tiger again until he drifted out of the sport in the late sixties.

He still took an interest and did turn out at Paisley in the mid-seventies, and again during some of the veterans events during the Powderhall days. He was a regular in more recent years at WSRA dinners and the Scottish section made him their guest of honour a couple of years ago.

Jack, or Red, was a delightful man, intelligent and good humoured with a great love for speedway. He will be sadly missed.