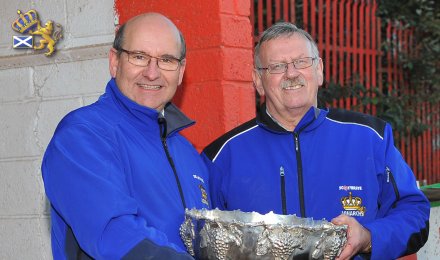 The bosses with one of our many cups Image Credit: Ron MacNeill

The Scotwaste Monarchs are pleased to announce their admission prices for the 2010 season.

Said co-promoter John Campbell, "We always set our prices for anything at our Club to give us a reasonable chance to break even. That is always our only aim.

"After careful consideration we have decided to increase the adult and oap price for the new season but have left the child price at the same level as 2009.

"2009 was not all that kind to us weatherwise with a number of meeting postponed and many more running in less that perfect conditions. That had an impact on our admission numbers and as that is by far our biggest source of revenue it has an impact on the finances of the Club. Losing the Scottish Open on 31 July to rain when it appeared that we were going to draw our biggest crowd of the season was a bitter pill to swallow.

"We are entering an important time for the Club. Our final season at Armadale begins on 19 March and we are making plans to move to a new home for 2011. We simply can't contemplate a loss making season in 2010. It would put the whole future of the Club in jeopardy and no one would want to see that happen. We are about to enter the most costly era ever for this Club but also a time of great optimism for us. I hope that we can reveal some firm details shortly.

"We open the season with our restaging of the 2009 Scottish Open Championship. Admission prices for that event will be above the seasonal norm at ?18 for adults, ?14 for OAPs but children at the normal price of ?5.

"Early arrivals that night will receive a free bottle of the special limited edition Homecoming Coca Cola, a very valuable commodity for those who followed its trading on Ebay in the last year. We'll be introducing our new team and have a fireworks finale to greet the winners. It's less than six weeks to go now and I'm really looking forward to opening night."

The matchday programme will remain at ?2 although a special edition will be produced for the first meeting and will sell at ?2.50

Children under 12 with paying adult Free

Children under 12 with paying adult Free