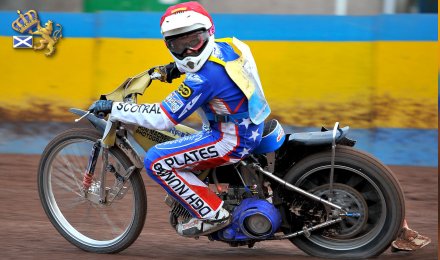 FISH LEADS THE WAY TO A BIG WIN

Ryan Fisher was the best of several good Scotwaste Monarchs tonight, scoring a 5-ride maximum and smashing the track record as the team clocked up 59 and took all three match points.

It was his most dominant performance for a little while and even Magnus Karlsson and David Howe were unable to threaten him. The track record is now 53.9, set in heat 1 after Ryan gave Magnus something of a shoulder charge on the way to the first turn.

Others in top form tonight were Andrew Tully with a paid maximum from four rides, bouncing back really well from his bad night the week before, and Kalle Katajisto once again.

Riding a different engine from the one he used last week, Kalle was just as impressive and recorded a time of 54.4 in heat 2, which was also inside the old record.

In the middle pair neither of the two Ws Wolbert and Wethers was quite at his best but they did start with a 5-1, and both also finished in 5-1 heats following Kalle home.

The young Finn, who heads for Manchester overnight en route to the Czech Republic, followed up his 19+1 of last week with 17+2, only missing out on a paid 21 in a close final heat in which David Howe just beat him.

It was a disappointing night for Jozsef Tabaka with just three points, not looking as lively as he has done, and it was even worse for the pointless Max Dilger who doesn't look fit at all.

Howe and Karlsson rode well enough for Scunthorpe, but they were generally outpaced by the top home riders, and only managed one race win each. Carl Wilkinson was worth watching as he always is and Jerran Hart had his moments.

Scunny will be much more formidable on their home track on Monday.