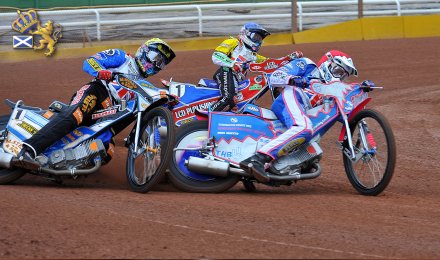 Andrew Tully made his British Final debut at Wolverhampton on Monday night, but would probably be a little disappointed with a score of three points.

In heat 1 he gave a really hard race to both Harris and Nicholls, leading Nicholls for almost two laps. That augured well, but in heat 5 he burst through the tapes trying to get another good start, and that seemed to unsettle him a bit.

After a slow start in heat 9 he rode well to move in and challenge the King brothers, but got too close to Daniel and fell.

He finished with two third places, but didn't ride as well as we know he can in these heats after two further slow starts.

It surely won't be Andrew's last British Final, and with this experience behind him he can do better in the future.

It was far from a great spectacle, in spite of the efforts of the riders. Too many of them got into difficulties and only in the latter stages did we see some decent racing. Chris Harris was involved in a couple of tumbles but showed his courage and resilience to come through and retain his title.

The overall impression though was that British Speedway does not have an outstanding crop of riders these days ? no obvious contenders for the Grand Prix here, with current GP participant Tai Woffinden not qualifying.