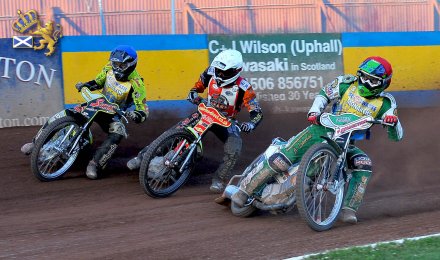 BACK TO THE TOP

The Scotwaste Monarchs returned to the top of the Premier League tonight with a win by 54-35 over Redcar. As is becoming normal, the early stages of the match were a struggle and Monarchs led by a mere 3 after heat 9.

The visitors supplied only two race winners ? Gary Havelock in heat 1 after Ryan Fisher had fallen, and Tomas Suchanek in a gift 5-0 in heat 8. But they were able to take advantage of the problems the home team had ? four exclusions, two other falls and an engine failure while leading for Kalle in heat 8.

Monarchs COULD have had four unbeaten riders, because Fisher, Katajisto, Tully and Wolbert won all the heat they finished. But there had been so many problems that it was nerve-wracking watching our 5-1 pairings in heats 10 and 12, in case something went wrong as it had so often.

After that we were almost home and dry, and took further 5-1s in heats 12, 13 and 14 before Andrew took a tumble which wrecked his maximum in heat 15.

Cal McDade struggled on his full debut and unlucky Tobias Busch took two falls, one due to a chain loss.

Charles Wright made a good start to his Redcar career, and their guest no. 7 Robert Branford impressed with his tidy style and seemed to fear no-one. It was good to see his dad Darrell for the first time since he rode for us in 1988.

We are one point ahead of Birmingham at the top of the table.