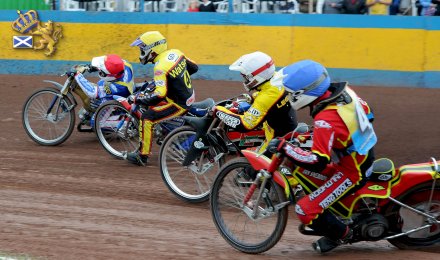 FOUR POINTS CLEAR AT THE TOP

The Scotwaste Monarchs threw quite a few points away but took all the match points in a 52-38 victory after an entertaining night of Speedway.

Five of the team had non-finishes during the evening ? two for Tully ? but they had enough scoring power to have the result sewn up with a couple of heats to go.

For the second home match running there was a 0-5 heat result, this time in the final heat in which both Fisher and Tully fell.

Turning to the Wasps, they gave a lively display and contributed plenty to the entertainment. Craig Watson had his best Armadale meeting for years, looking like his old self, and Leigh Lanham has rarely had a bad outing at the West Lothian track.

Kyle Legault and the two Swedes were also involved in some decent tussles. Davies and Kurtz at reserve were a little disappointing perhaps.

All of the home riders had something to be happy about but something to regret also! Ryan Fisher started with a fast win (54.2) and looked likely to go through the card till he missed the gate and fell trying a big dive on the pits corner.

Andrew Tully was excellent in four of his heats, pulled out of heat 7 with a front wheel puncture, and fell while trailing the Wasps in heat 15, causing a second rerun.

Matthew Wethers turned in some exceptionally clever racing and also looked likely to finish unbeaten until he was headed by Watson in heat 14, and excluded for bringing down Lanham in the final race.

Cal McDade disappointingly fell while looking sure to record a paid win in heat 2, then picked up very useful third places in his other rides.

Kalle Katajisto looked really wild in his first three rides, crashed in one, then came good with some of his spectacular heat wins.

And finally Tobias Busch started with two disappointing last places before looking impressive with a second behind Kalle in heat 8.

The team now head off on tour to Rye House and Newport over the weekend.