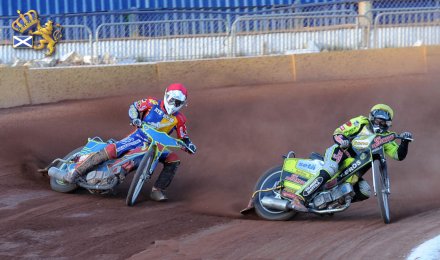 The Scotwaste Monarchs retained their unbeaten away league record by winning 45-44 at Rye House in possibly the most dramatic finale we have ever been involved in. If you think that is an extravagant statement, read on.

Without Kevin, who has missed both his Russian trip and our matches due to illness, and with neither Tobias nor Cal managing a point, we watched as the other four heroes piled up enough points to take the win. It had been nip and tuck all the way with Rockets just holding the edge most of the evening.

We will take up the story after heat 12, in which we failed to gain a heat advantage over home captain Neath. That left Rye House 37-35 ahead.

In heat 13 the home side fielded Sundstrom and Frampton, both in great form, and we seemed to be up against it. However from gate 1 Ryan Fisher raced to the front and rode a brilliant heat to prevent us from losing any ground.

On a night of fluctuating fortunes, that swung the balance our way as we looked strong in heat 14. Matthew Wethers gated, but Kalle was pushed to the back. However guest reserve Jerran Hart fell on the next bend, and on the first turn of lap two Kalle cut inside Ekberg to put us on a 5-1!

From the pits end we could clearly see that the sun was shining into one of the red lights and made it appear to be lit. Kalle saw this too and slowed, losing second. The race had not been stopped though, and Kalle was touring and trying to make a complaint to the ref at the same time.

Ekberg then fell as well, and remounted, and Kalle summed up the situation quickly enough to pass the home no. 4 again!

Confusion reigned but there was no reason not to announce the heat as a 5-1, fully deserved, leaving us two points ahead, 43-41. And the drama hadn't even started yet!

The final heat lined up ? gate 1, Matthew; gate 2 ? Jordan Frampton; gate 3 ? Ryan; Gate 4 ? Linus Sundstrom. On earlier form we seemed to be looking to Ryan, but he jumped too early and touched the tapes as they went up. Matthew made a good gate from the inside but it was stopped.

So back he went to the 15 metre mark, with Matthew losing the advantage of gate 1. Things had swung in Rockets' favour ? until Frampton made the same mistake and touched the tapes!

Now we had Fisher and Frampton back off 15 metres, with Frampton on the outside and Wethers restored to gate 1. And the captain really made that count by making a brilliant start and taking the lead! Sundstrom was chasing and of course was a major threat, with Frampton having outgated Fisher and holding third. Sundstrom seemed to get under Wethers, but Matthew brilliantly came back to squeeze ahead again!

Next time round, Sundstrom tried a cutback ? and overslid and fell! Frampton and Fisher missed him, but Frampton lifted and ran into the back of Matthew. Mayhem!

Frampton was excluded and that meant we were almost home. Incredibly, it was ruled that Sundstrom had remounted and was under power at the time of the stoppage, though there was no way that can have been the case.

We still hadn't quite reached the end though, because at the three-man restart, Fisher stalled his bike and was ruled out on 2 minutes. That left Matthew on his own against Sundstrom, and wisely he let the Swede go and made sure we got the two points needed for victory.

An incredible effort with Kalle on 15+3, Ryan 13 and Matthew 11. A really unexpected and memorable victory.