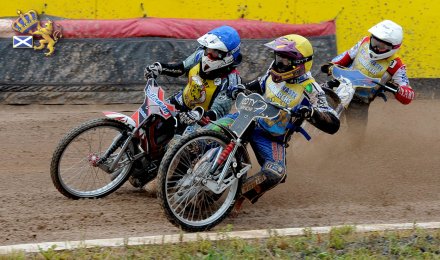 The remarkable Scotwaste Monarchs pulled off another away victory ? that's five out of five in the league ? when they won 39-33 at Newport in a match curtailed by rain.

It was the right decision as the track had been made slippery by constant drizzle, and was only going to get worse.

Newport might be regarded as a ?soft' target for league title contenders, but they were a tough nut to crack with new signing Robin Aspegren excelling.

On the Monarchs' side it was a day to remember for Tobias Busch who was riding Kalle's second bike after wrecking his own at Rye House. He was tremendous ? paid 11 from 4 of his rides with a fall in the other.

We certainly got off to a great start with a 5-1 and 4-2 while Wasps suffered a 2-minute exclusion for Lanham and a fall by Kurtz in the reserves' race.

That 6 point lead lasted till heat 6, but two 5-1's by the Aspegren / Lanham pair gave their team a 2-point lead by heat 10. We needed something special ? and we got it.

Busch rode another brilliant first corner in heat 11 with Fisher joining him at the front, and even though Davies stayed in touch we were back in front.

Tobias' performance brought him a deserved rider replacement ride in heat 12, with Kalle coming in to replace Cal McDade, and with the two KK bikes out we had another super race to enjoy. Both pulled off outside overtakes in the difficult conditions to give us another 5-1 and a 39-33 lead.

There was a delay then for more grading, and with the drizzle still falling the call-off decision was not a great surprise.

Monarchs have now won nine matches in a row, and lead the Premier League by an incredible nine points. In our next match we face rivals Birmingham at Armadale on 16th July.