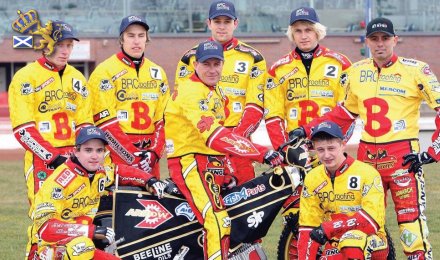 You could not stage a bigger match after the break for the Cardiff Grand Prix than Friday's Premier League table top clash at Armadale between the Scotwaste Monarchs (first) and the Birmingham Brummies (second), with the Brummies thirsting for revenge for the sensational win Monarchs took in Birmingham back in May.

The visitors have listed star reserve Chris Kerr who is due to return this week after two months out with a broken leg, and if he regains his early season form he will make a big difference.

MATTHEW SHOULD BE OK: Alarm bells were ringing on Monday when captain Matthew Wethers, having won his first heat, crashed second time out during Wolverhampton's Elite League match with Swindon.

He took an ambulance ride and was ruled out of the meeting.

Today he said ?I felt pretty rough after falling and getting knocked out at Wolverhampton. I have a sore head and neck, at the back of my head where the helmet meets the neck.

?I should be fine for Friday if I can get the bike back together. The forks are definitely gone, the front wheel, possibly the frame ? it's all replaceable.?

He stated his intention to also ride in Friday's league match but he has still to confirm that necessary travel has been arranged.

If he is unable to ride on Friday Monarchs will be entitled to rider replacement.

MATCH SPONSOR: The Black Bull Inn of Mid Calder are sponsoring Friday's big match against Birmingham. This is their first match sponsorship though it comes through Donald McLauchlan, a long term friend of the Monarchs as supporter and sponsor.

SENSATIONAL BRUMMIES: Had Birmingham maintained the start they made to the season, it is unlikely anyone could have stopped them winning all the trophies this season.

They took maximum points home and away in their Premier Trophy group, a feat unheard of, and were looking just about the strongest team ever at Premier level until Monarchs went there and won!

They have been hit by their injury jinx though and have raced for two months without Chris Kerr. Recently he was joined on the injured list by Aaron Summers, Monarch of 2007-9, and while Kerr is back this week, Aaron is not.

He will be missed on Friday no doubt though the Brummies have a strong rider replacement.

Their early season team had a remarkable six Aussies though one of these has since lost his place. With veterans Jason Lyons and Steve Johnston plus youngsters Richard Sweetman and Justin Sedgmen, they still have a very powerful Aussie core.

They represent a real threat on Friday and Monarchs will need to be at their best.

FIVE AWAY ? UNBEATEN: Monarchs followed the home win at Newport by winning 45-44 at Rye House the next day, and 39-33 in a curtailed match at Newport on the Sunday! That means they have now ridden five away league matches and won them all, a remarkable feat.

NEXT MEETING: The Keyline Scottish Open Championship is the big event at Armadale on Friday 23rd July.