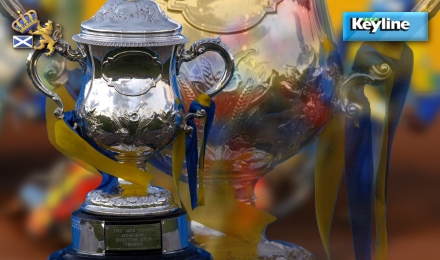 Pepe Franc used to think that Armadale was a difficult track ? but now that he is 2010 Keyline Scottish Open Champion he loves it!

After a slow start he won his final two rides, then the semi-final and final, while other more fancied candidates floundered.

Considering the excellent field and all the work and sponsorship which goes in to the Scottish Open, it was a disappointing speedway meeting with far too many falls and delays. Time was lost in the early part of the meeting and thereafter it was rushed, with the final just squeezed in at curfew time of 10pm.

Many of the pre-meeting favourites put themselves in difficulty early on by falling off. It turned out there was a reason, but it was surprising to see Joe Screen (heat 1), Kalle Katajisto (heat 3), Tobias Busch (heat 4 ? leading), Chris Slabon (heat 5), Rory Schlein (heat 7) and Ryan Fisher (heat 8) all fall off.

It was taking ages and the racing was disappointing. Toby Busch had been well clear when he fell in heat 4, and he had more bad luck when Slabon fell in front of him in heat 5. He was awarded second in that heat but he was out of the meeting.

After everyone had had two rides, Jason Lyons was on 6, James Wright, Andrew Tully and Oliver Allen had 5. Way back, Josef Franc was on 2 and didn?t look like a candidate for the latter stages.

Lyons also won his third ride, while Fisher, Slabon and Screen made up for falls with race wins to get back into the running.

Heat 13 was a decent race at long last as Rory Schlein tried everything to pass Oliver Allen, missing out by inches. Rory was now on 6 and desperately needing a win.

Josef Franc then took his first win while Matthew Wethers got the better of a good battle with James Wright. The holder had started with a fast win but was gradually fading and now had 8.

Andrew Tully led heat 15 from Slabon and Fisher when Ryan misjudged his passing move and brought the Polish rider down. Ryan was out and he was now in trouble.

Andrew won the rerun and was looking good for direct entry to the final.

Joe Screen was going well now and became the first person to take a point from Lyons in heat 16.

Jason still led on 11, Andrew Tully had 10, Oliver Allen was on 9 with Screen, Wright and Slabon on 8.

Josef Franc made his bid for the semi by winning heat 17. William Lawson and Kalle Katajisto both finished in this heat after disappointing performances.

Heat 18 was clearly a big one, and it went wrong for Rory Schlein who shed a chain at the start. Lyons gated but with a perfect move, Fisher cut past him on the second bend and went on to win. His total was now nine from 3 wins and two falls, while James Wright was also on 9 but with only one win.

Allen headed Tully in heat 19 which left both on 12 and put them both into the final with Lyons.

There were three contenders in the last heat and once again it was Screen who took his third win (total 11). Matthew Wethers held off Chris Slabon which meant that they also had 9, but Matthew had no race wins.

There were just a few minutes left for the two deciding heats. There was still time for controversy though!

Screen gated well in the semi (only the winner to qualify) but Fisher cut past him out of turn two and led down the back straight. Franc also came past Screen into second. Fisher seemed to speed up on the pits turn, possibly hit a rut, and swept out to the fence ? and fell.

Franc and Screen went by and both Screen and Slabon slowed, expecting a stoppage. But Fisher was up and into the pits, the fence was at a bit of an angle but not really dislodged, and on we went with Pepe Franc well ahead.

The final lined up Franc (gate 1), Allen (gate 2), Lyons (gate 3) and Tully (gate 4). Franc was quickly clear and the others could not get near him, with Allen beating off Tully?s challenge for second. Jason Lyons was never in the hunt.

Pepe was a happy man and most of us were glad that a disappointing and long night was over, with no serious injuries.