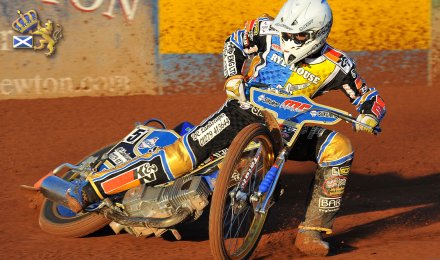 BACK TO LEAGUE BUSINESS AGAINST ROCKETS

The major target for any team is to win their league so the Scotwaste Monarchs will be pleased to get back to the main business when the Rye House provide the opposition at Armadale this Friday (7.30pm).

Monarchs will be without their Finnish starlet Kalle Katajisto due to the foot injury sustained at Glasgow on Sunday, but for Friday they have Josef Franc standing in ? appropriate in view of his great victory last Friday. Rockets are at full strength with super Swede Linus Sundstrom at no. 1 and a new reserve in Paul Starke, signed from Plymouth.

KALLE'S FOOT: Fears that Kalle Katajisto had broken his foot thankfully proved unfounded but the Finnish teenager will have to take a short break from racing.

He has returned home for a rest and so will have ridden his last match in what has been a very profitable spell at reserve.

It is hoped that the foot will have healed sufficiently to allow him to return for the home leg of the cup tie against King's Lynn on Friday 6th August.

CUP QUARTER FINAL: Monarchs travel to King's Lynn on Wednesday for the first leg of the KO Cup quarter final.

Guest reserve standing in for Kalle Katajisto will be Carl Wilkinson. Monarchs will otherwise be at full strength.

King's Lynn have their no. 1 Kevin Doolan out injured and their replacement will be Chris Schramm.

He recently launched his autobiography and will be selling and signing copies as well as watching the match from the George Hunter Memorial Lounge in company with supporters who have purchased Hospitality tickets.

ROCKETS GOING WELL: Just because Monarchs have had two brilliant victories at Rye House this season, in Cup and League, it should not be thought that the Rockets are not a good side.

They are, and they are known to favour Armadale. They were semi-finalists in the Premier Trophy this season and have won two away league matches to balance up their home loss to Monarchs, so they are well placed and definitely potential Playoff candidates.

Linus Sundstrom is probably the most impressive visitor to Armadale this season ? he won four races and fell in the other when Rockets were up in the Cup.

PREMIER FOURS: This event takes place at Peterborough on 15th August. The groups are:

LAST MEETING: The Scottish Open Championship was deservedly won by Sheffield's Josef Franc who romped away with the final ahead of Oliver Allen and Andrew Tully.

NEXT MEETING: Pn Friday 6th August Monarchs will race against King's Lynn at Armadale in the second leg of the KO Cup quarter final.