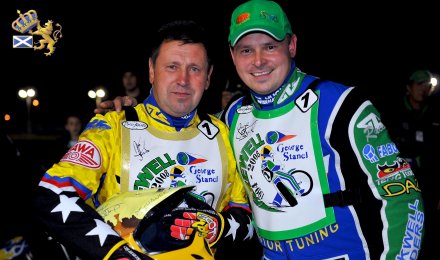 Andrew and Matthew Wethers were both in the field, and Andrew had a strangely subdued meeting (riding for the Glasgow Select!)

Team manager for the night David McAllan explained "Andrew discovered that when he hit the fence last Friday night he had actually bent the frame.

"He also had a spark plug problem but was able to sort it all out during the night. Better to discover these things in a Testimonial than in a Playoff!"

With these problems Andrew only scored 1, while Matthew had a good night with 7 points for the Wolves Select. However Matthew lost a point when he stopped on the last bend of his final heat.

It was a successful night for George even though there was drizzle around all day. He rode in demonstration heats with his dad Jiri and ex-World Champion Sam Ermolenko.