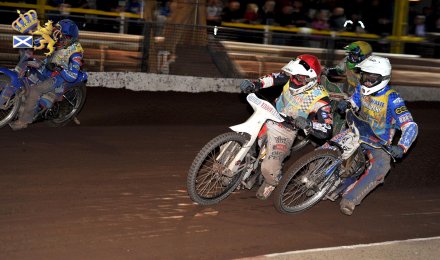 Heat 15 - on the way out Image Credit: Ron MacNeill

OUT OF THE PLAYOFFS

We are so used to seeing the team succeed, it came as a shock to be well beaten at Sheffield, failing to defend a 28-point lead and going out of the Playoffs 31-61 on the night, 90-92 on aggregate.

Remarkable really, but we were outgated and outfought on the night by a Sheffield team clearly galvanised by Neil Machin's pre-match criticism of their performance at Armadale.

Not one of our side came anywhere near their usual standard. We had three of the first five race winners but added only another one, and when Ryan Fisher unusually failed to come up with the points we have come to expect, there was no-one else prepared to come up to the mark.

Matthew Wethers tried hard but was constantly handicapped by bad gating. Andrew Tully thought he had sorted his machine problems on Monday but they followed him here, and we had a series of vital fallers - Ryan twice, Matthew twice and Andrew.

Kalle started with a great win from the back but struggled after that, being baulked on his TR ride in heat 7.

At reserve, we achieved next to nothing with William Lawson again looking very slow.

We trailed 38-16 after 9 heats and were in trouble, but that heat 10 4-2 seemed to give us a chance, especially when we shared the next two heats. Ryan led his TR race in heat 11, but Matthew fell at the back and in the rerun Ryan could only take second to Ashworth.

We also shared heat 12, William Lawson's only decent ride, and with three heats to go we needed 6 points.

Ryan fell when second in heat 13, Kalle couldn't gate well enough in heat 14 and the aggregate scores were level going in to the last race.

On the first corner Ryan fell again, and it should have been a home 5-1. The chequered flag was shown after 3 laps but the rules now allow the referee to award the race when this happens. It wasn't clear if referee Vardy noticed.

In fact Ashworth slowed and let Kevin through into second, but it wasn't enough anyway. It wasn't worth making a fuss, we were out.

We can't be overly critical of a team which has achieved so much. "Bad day at the office" as they say. Well done to Sheffield, you've all kept your places for next season.

After a season of so many faraway one-off fixtures, we have generally travelled home elated by the super showings we have seen. It felt a bit different tonight!