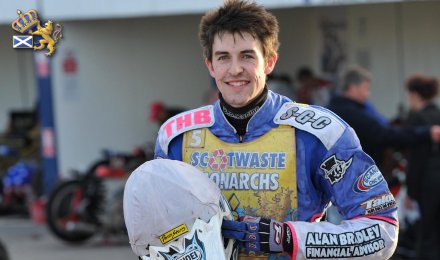 Andrew Tully, a key man in the league winning teams of 2008 and 2010, returns to the Scotwaste Monarchs' side for the season which starts next March.

He said ?I'm happy it's all sorted now. I've been involved with the good years we've had recently but Matthew's been there for all three league wins, so that should be a good start to the team. It will be interesting to see what the rest of the team's going to be.?

Although his average fell in 2010 many felt that in some ways he matured as a rider. Andrew said ?I think different parts of my riding got better. I improved on my gating, and I was more confident going out against better riders.

?One of the reasons my average wasn't better was the number of times I fell and got excluded. If these had all been third places my average would have been quite a lot higher.?

The 23 year old is the second name to be announced for next year's lineup, following skipper Matthew Wethers. It is Andrew's fifth consecutive season with Monarchs having also ridden a single match back in 2004. He graduated via a spell as club mascot and also membership of the Dale Devils Conference team.

Monarchs' Australian rider Aaron Summers, who rode for the side in 2007-9, has been transferred to Redcar. The club wishes him well. The outcome perhaps illustrates the problem of having a lengthy list of riders who cannot all be accommodated under the points limit ? having let one go out on loan (Summers rode successfully for Birmingham last year) it is hard to get him back.

It should be noted that revised rules on doubling up would now allow Ryan Fisher to ride for Monarchs as well as an Elite League club and this certainly remains an option for the team in 2011, whatever may have been read into recent quotes to the contrary.