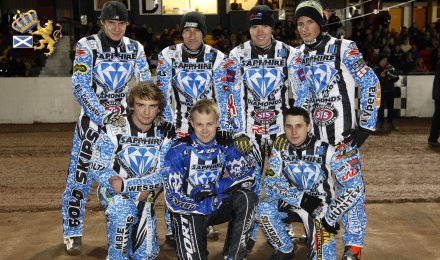 Speedway returns to Armadale this Friday (7:30pm) with a trophy up for grabs right away ? 2010 Premier League winners the Scotwaste Monarchs contest the Premier Shield over two legs with the 2010 Knockout Cup winners Newcastle.

The second leg is at Newcastle Stadium on Sunday 3rd April. The teams of course are different from last season and Monarchs will track newcomers Craig Cook and Jay Herne alongside five of last season's league-winning side.

KEVIN KEEPS BUSY: Kevin Wolbert will be doing the majority of his racing in the UK this season, and made an excellent start riding for his Elite side Birmingham at Wolverhampton on Monday ? 7 points including two wins.

He rides for the Brummies again on Thursday and assuming he keeps up this standard he will have what he wants ? a busy UK season!

SPARKLING START FOR DIAMONDS: Newcastle are rated likely to be one of the strongest sides again in 2011 and they emphasised that with a home and away victory over Berwick in the Tyne/Tweed Trophy last weekend.

POST-MATCH ANALYSIS: One innovation at Armadale this season will be a post-match analysis in the main bar.

Promoters John Campbell and Alex Harkess will discuss the preceding match on a weekly basis with a view to explaining decisions and incidents, and answering questions.

NO MATCH ON SUNDAY: Everyone is probably aware by now that Glasgow have postponed their opening meeting which was due to be the Spring Trophy 1st leg against Monarchs on Sunday.

A revised date has not been set yet.

ADVANCE TICKETING: Supporters are reminded that they can buy tickets for the following week's match at Armadale every Friday.

Discounts are also available if tickets for the next match are bought on the website. This week, this facility will be available till Thursday 6:30pm (for Friday's match against Newcastle) but generally it will close at 8am on Monday.

IT COULD HARDLY BE TOUGHER: The Scotwaste Monarchs could have no tougher opposition to start the season than Newcastle.

They may not have their top rider Kenni Larsen from last season's team, but they have been able to enlist Stuart Robson on a very attractive average from the Elite League, courtesy of one of the winter's rule changes!

Robson scored a maximum for the Diamonds in last year's KO Cup Final as a guest rider. Add in top Danish talent Rene Bach and the amazing veteran Aussie Mark Lemon, and they hardly seem to have been weakened at all.

Derek Sneddon has also made a good start to the season which suggests a very tough night indeed on Friday for the ?new-look' Monarchs' team.

NEXT WEEK'S MATCH: This looks like another tough match ? the first leg of the Spring Trophy against Glasgow Tigers at Armadale on Friday 1st April (7:30pm).