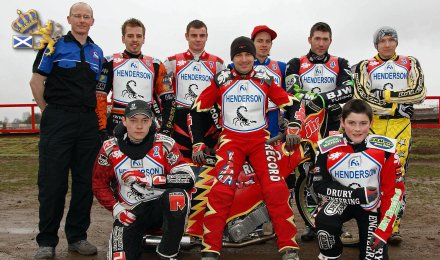 After a dramatic weekend last week, the Scotwaste Monarchs play host to Scunthorpe on Friday at Armadale Stadium, with two new boys in the side.

The Scorpions list a full strength side too, and the teams meet in the return on Monday evening. Monarchs' captain Matthew Wethers says ?It was very disappointing to lose last Friday night. I don't think anyone really saw it coming and it's a result which we can't let happen again.? Monarchs of course lost at home to Leicester last Friday but won at Newport the following day.

NEW SIGNINGS: In a dramatic week, Monarchs announced on Tuesday that Lee Dicken and Kyle Howarth would replace Jay Herne and Ashley Morris with immediate effect.

Those moving on have our best wishes for the future, and the new boys are welcomed.

Lee Dicken is 32, and a very experienced rider who last rode for Glasgow in 2010, but finished the season on the injured list.

Kyle Howarth is 17 and steps up from the National League where he rides with the Belle Vue Colts.

LEE'S TARGET: Lee Dicken takes a very positive view of his move to Armadale. He says ?I enjoy riding Armadale, it's not an absolute flat-out track, it takes a bit of technique, which works for me, I like that.

?I've set myself the target for Friday of winning heat 2. I'm six weeks behind the rest of the lads, and also I was a month off at the end of last year and I'm coming back from an injury! So heat 2 is a must for me, if I can win that, all of a sudden the confidence comes back. It becomes so much harder if I don't make the gate in that heat 2.

?I've got no doubt at all that even though I am going to be rusty, if I make the gate in heat 2 I will win the race. My biggest target is to make a blinding start in heat 2.

THE MONARCH WEDDING: On a big day for the Royal Family, recently married supporters Peter Thomson and his wife Nichola will be guests of honour at Armadale in their wedding regalia ? and anyone attending the match in a wedding dress will be given free admission!

SCORPIONS LOOKING FOR A CHANGE OF LUCK: Scunthorpe have been one of the unluckiest sides in the Premier League this season, having been without their Finnish rider Tero Aarnio for a while and even more seriously, losing Carl Wilkinson with a broken leg.

However Aarnio is back now, and former British Under-21 champion Joe Haines has come into the side to replace Wilkinson.

Ben Wilson has been scoring good points and after struggling early in his career at Armadale, has recently ridden the track well.

Their reserves are an unknown quantity as both will be making their debut at the West Lothian track, and Monarchs will not be taking anyone lightly especially after last week's result.

LAST WEEK'S MATCH: The Scotwaste Monarchs suffered a shock defeat when they lost 44-45 to Leicester, even though they held a 9-point lead at one stage. Top Monarchs were Matthew Wethers and Andrew Tully with 11. The next day Monarchs made up for this with a 49-42 win at Newport.

NEXT WEEK'S MATCH: The Scotwaste Monarchs race the highly-rated Ipswich Witches at Armadale on Friday 6th May.