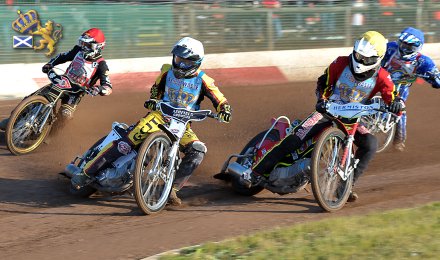 NO POINTS AT REDCAR

We scored a 5-1 in heat 1 at the STMP but it didn't take long for the tables to be turned, with the Bears taking all three points in a 54-41 victory.

We have won four times in the last three years at this venue, but the current Bears side are on the up with Matej Kus and Aaron Summers taking the lead and their two veterans backing up.

On the other hand the Scotwaste Monarchs are struggling for form, and only guest Leigh Lanham plus wide-riding Kalle Katajisto went well here.

Wide riding, and of course good gating, are what are called for here, and too often we didn't manage either.

It was also good to see Kalle enjoy some success for his wholehearted efforts, and his win from the back in heat 10 after avoiding both the fence and Peter Juul's shoulder was one of the night's highlights. He also had a good battle with Havelock in his TR ride in heat 14, scoring 4.

Matthew showed determination to win heat 8 for six points, and of course did well in heat one, but both Andrew Tully and Craig Cook rode rather as they did on Sunday at Ashfield. Enough said.

Lee Dicken had an improved meeting and battled for his four points, but young Ashley struggled again in spite of a decent start in heat 2.

James Grieves is our guest for Wolbert in Friday's tough-looking match with Sheffield.