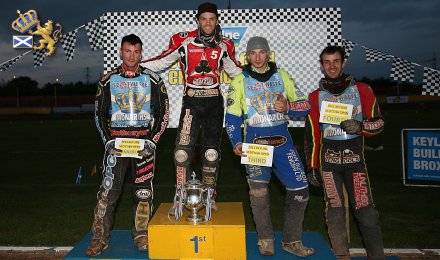 The top four on the rostrum Image Credit: Jack Cupido

RORY WINS - BY A STREET

It was built up as Rory Schlein versus the home boys, and the Monarchs' top men rode well - but they couldn't get near the Aussie who strolled off with his third Open title.

Rory took five wins in the qualifying heats, but he still had to come out in the final against Kevin Wolbert, Craig Cook and Andrew Tully. He made no mistakes though, and jetted away with the final.

Kevin Wolbert gave chase but had to settle for second, with Craig Cook third.

The only time anyone almost got the drop on Rory was heat 16 when Cook was sharply away, but Schlein was so powerful into the first corner that he was ahead and soon gone.

King's Lynn's Oliver Allen might have been in at the death but he took a spectacular tumble in the first race, with the rider finishing up on the wrong side of the fence. He doesn't seem to be badly hurt but had to pull out of the meeting.

The best heats were towards the end of the evening, especially the semi-final in which Matthew Wethers brilliantly rounded Andrew Tully to grab the last place in the final.

If there was an entertainer's prize it might well have gone to Sam Simota, who scored an exciting 7 points in his first UK meeting for a while.

Rory Schlein said "I love coming back here and showing the people who gave me my first break in speedway how I've progressed. I've still got so many friends here."

Runner-up Wolbert said "I'm happy because I've done so much better than in my previous Scottish Opens!"