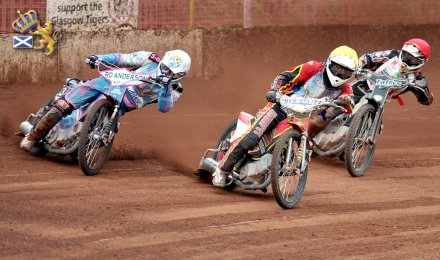 One of our good heats today Image Credit: Ron MacNeill

Tigers felt that, with three regulars missing, we might upset their title challenge at Ashfield today, but we disappointed our travelling fans with an insipid performance and went down 32-58.

Were Tigers very good or were we very bad? Well it would be uncharitable not to give credit where it is due, because Tigers had a superb guest in Claus Vissing, great reserves in Rajkowski and the high scoring Morris, and very sound showings from everyone else. No weak links.

Turning to our lot, once again we saw the gulf which has developed between our home displays (good) and our away ones (often bad). The magic touch which made us so competitive, and so often successful, on our travels in recent seasons has deserted us.

The team we have should be capable of a lot better, and to be honest we have probably never been poorer at Ashfield. Andrew Tully had a good meeting looking really fast on the track where he was injured last year, Matthew was pretty good and Kevin raced hard following some poor starts.

That was that. The only excuse we had was that Craig Cook was unwell, something he had been aware of the day before but thought he could ride through. There was something of a mix-up which caused him to be posted missing after the Ben Fund collection, because Craig thought he had completed the three rides necessary and wasn't needed.

In fact because of the tapes exclusion in heat 6, he should have taken another ride and we had to go with one rider in heat 13. It made no difference, obviously.

Kalle and the two reserves achieved little (Adam McKinna replaced Tim Webster who had crashed at Stoke) and we were never in the hunt right from the time we stood at 2-10 after two heats.

Tigers were understandably delighted to get over what they had seen as a potentially difficult hurdle and will have their tails up for the Armadale return on Friday. We have handed them the psychological advantage and need to up our game to its usual level by the end of the week.