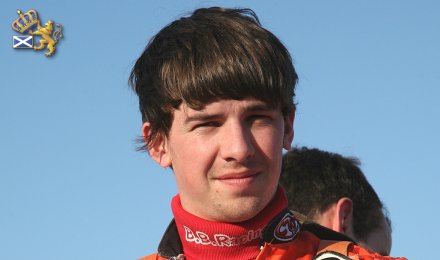 Charles Wright comes to Edinburgh with optimism based on a fair past record at Armadale ? a CMA of 5 after 7 previous appearances.

He said ?I wouldn't say Armadale is one of my favourite tracks but I seem to ride well there. I know it's a difficult track but I don't seem to mind it. My scores there are quite good and I got double figure the first time I was there, I think I fell off twice as well!

Edinburgh actually hoped to sign the younger Wright last season to bring some experience to their reserve berths, encouraged by the fact that Workington delayed signing him (though they eventually did). ?He kept me on until about February. Glasgow have always been interested in me and they were interested again this year, but they got there too late.

?I've always heard good stuff about Edinburgh, they treat you well and are always really good with you, so I thought why not??

Last season was a mixed one for the 23 year old, in that he suffered no injuries but lost his place twice. ?I got through last season without an injury, and that was probably my only year without injury to be honest, but I ended up getting dropped when I didn't expect it because I was riding well.

?At Workington he was paying me well so he was expecting double figures every week, so it's a bit of pressure to be honest. But I was riding well and I was shocked to be dropped.

?Then I went to Leicester and the only reason I lost my place there was they needed to drop two of us to get a higher average rider in. They ended up having to get rid of me which they didn't really want to.?

He has in the past been unlucky with injuries but doesn't see the after-effects as a problem. ?I've had quite a few ? I've got a bad wrist, and I had one in 2010 where I didn't actually hit my femoral artery, I was just millimetres away from it, so that could have been a nasty one. But apart from that I don't have any problems.

Charles feels that he will have competitive machinery. ?I've got a good sponsor based in Leicester who is a friend as well, Nigel Kimber. He's going to be coming up with me for a few meetings and he helps me a hell of a lot. I did have some other sponsors based in Leicester but Nigel said from day one he'd help me wherever I rode. My other sponsors were just interested in me riding for Leicester so I've kind of lost them.

?So I am looking for some sponsorship if there is any out there. It's more to do with travel because it never quite covers what you spend.

?I stay in Manchester, I did live in Leicester for a bit while I was riding there. Hopefully I'll get someone to help even if it's not a mechanic, so I can have a rest and not have to do all the driving.?

On the team he said ?I've seen quite a few people don't seem too happy with the team, but you can't say that because all the way through the team are quite consistent. We don't have a number one but through the other heats it should pay off. I think it's quite a good team, especially at Edinburgh we should be strong.

?Often the teams that look very strong and are expected to win the league don't do it. It just depends who's firing. Once you get on a run it's hard to knock you down.

?Probably the one I know best is Craig Cook because I rode with him at Workington and Buxton, but I've spoken to the others and I know they are quite nice people, I get on with them. Hopefully they will help me out and maybe I can help them as well.