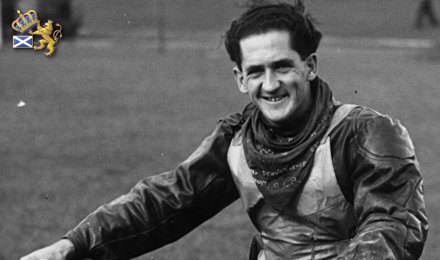 Australian rider Keith Cox, a Monarch in 1948 and believed to be the oldest surviving Monarch, has died in hospital in Brisbane.

He passed away on Tuesday, three weeks short of his 89th birthday.

Keith started riding in September 1946, and was sent across to the Johnny Hoskins organisation by another rider, Charlie Spinks. He came to Edinburgh via Newcastle, where he wasn't getting many rides. He rode 22 league matches in 1948, scoring 62 points at a CMA of 4.96.

He was going to return with his wife in 1949, but the arrival of their first child changed their plans. He said ?I did you a favour by not coming back because you got Jackie Young in my place!?

He kept in touch with other former riders back home, and continued to ride motorcycles throughout his life. At the age of 70 he set a track record for a 70-year old at the Brisbane Exhibition Ground.

They will all miss this popular man, as we do.

Tony Webb reported from Australia on 29th December: "Keith Cox 16-01-1923-20-12-2011 had a tremendous farewell in Brisbane today. Mount Thompson West chapel was overflowing, with many people around the outside of the chapel, gathered to pay their respects to a Queensland legend. Speedway followers and a large number of his Ulssyes MCC members were in attendance. Among the many speedway representives were Bert Kingston, Nigel Boocock, Kevin Torpie, Tony Edwards, Arthur Morris, Graham Tobin, Barry Lane, and Barry Forsyth".