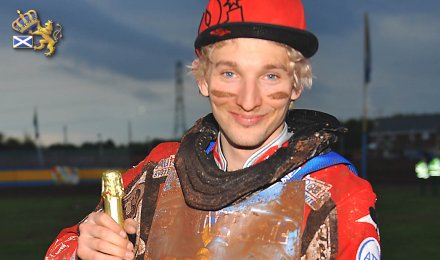 Craig with a DDS Monarch of the Match award. His hair is red this season! Image Credit: Ron MacNeill

Craig Cook returns to Armadale this summer for his second season as a Scotwaste Monarch, having raised his average by almost a point during 2011.

It will be Craig's fourth year in the sport. Monarchs' chairman Alex Harkess said ?Craig was the only man we considered for the final place and I'm delighted that he has now signed on.?

John Campbell added ?Although I offered a contract to Craig in the early part of December he asked for some time out to sort some personal problems. He's had three family members quite ill over the past month and needed time to be with them.

?My other business commitments have also resulted in me having little time to chase him but when he contacted me in the middle of last week it only took the exchange of a couple of emails and everything was agreed. If he could type quicker if would have taken even less time!

?His good meetings last year were outstanding but he had a few poor ones that brought him down a little. We're all going to work hard on making sure those are not on the agenda in 2012. He's got huge potential and will be pushing Andrew hard for the number one slot. That will be difficult as Andrew is determined to hang onto it.?

Craig is very optimistic about the season ahead. He said ?With what's happened with me and my family over Christmas speedway has been the last thing on my mind.

?But I've got the contract sorted now, I've been on my motocross bike today, I'm back in the gym, eating properly, feeling fit and I'm ready for the new season!?

?I think we'll be OK and I think we might surprise a few people in the away matches. I think a few people will underestimate us this year.?

Many will see the 24 year old from Whitehaven as the man with most potential to raise his average. Other than Micky Dyer he is the least experience rider in the side.

?I just need to get more familiar with a speedway bike. I'm coming into my fourth season, I just need to relax and ride the bike the way I know I can. It's all about confidence and as my confidence grows the better rider I'm going to become.

?I know the track pretty well now and if I can get the cutbacks working for the new season I'll be OK.?

He admits that things did go astray in the latter part of last season. ?This year I'm going to be 100% fit and ready for it, I'm twice as fit as I was last year. I lost track a bit last year of what was important to me, but I've got my head screwed back on now and it's not going to come loose again.?