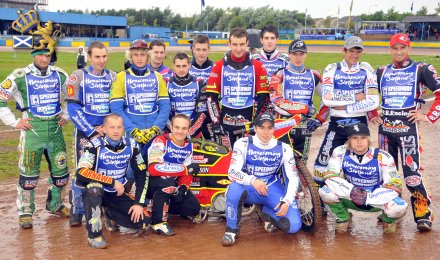 The Open in 2009 - called off in July! Image Credit: Ron MacNeill

Our prestigious individual meeting, the Scottish Open Championship, will open the Armadale season on Friday 23rd March and we are looking for a new title sponsor to support the event.

Explained co-promoter, Alex Harkess, ?Keyline Builders Merchants have sponsored the event for many years but they suggested that recent stagings had not attracted a quality field. Having been involved in assembling some of those fields I can assure everybody that no stone was left unturned in bringing the best available to the meeting.

"In the middle of the season it has become more and more difficult to get riders to Armadale. However, when we restaged the rained off 2009 Championship at the beginning of 2010 we did not experience the same difficulties. That was a strong influence on moving the date to the start of the season.?

Continued Alex, ?However, it was not the only reason for moving the event. We are staging a very important Testimonial meeting this year for Matthew Wethers. He is one of the very few riders in speedway these days to have qualified for the meeting by riding for the same club throughout the required ten year period. Matthew is a most deserving case for a testimonial season and we don't want to infringe on his plans if we can avoid that. Matthew was very keen to have his meeting in August when his parents are coming over from Australia.

"We also have in mind that the early season 2010 staging of the Open was very successful for us.?

As is the case with every Open, the Club are keen to engage as many sponsors as possible for the event. Co-promoter John Campbell said, ?The Scottish Open will cost us in excess of 50% more than any other meeting we will stage at Armadale this season. We do hope to have a bigger than normal crowd but, just like any other Friday, we don't know what the weather will bring. There will be a premium on the admission price for those who arrive on the night without having purchased an advance ticket but, again, this only marginally helps in the additional costs of staging. So sponsorship is a critical part of the financing of the meeting.?

Expanding on that theme, John said, ?We'd obviously like to gain a new Championship sponsor for the event and I'll be happy to speak to anyone interested in helping us. We are also looking for heat sponsors at ?300 a heat and also rider sponsors at ?100 per rider. All these sponsorships have some form of hospitality package attached so that sponsors can enjoy at least part of the event from our hospitality area. Anyone concerned about the temperature on the night can be assured that it will be pleasantly warm in the hospitality area.?

Invitations are currently being distributed to riders and the first announcement of those taking part will be revealed towards the end of February.

Anyone interested in sponsorship can email marketing@edinburghmonarchs.co or telephone John Campbell at the stadium on 01501 734404.