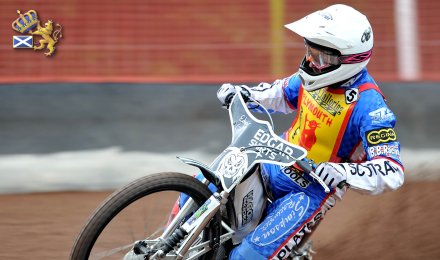 The Scotwaste Monarchs meet Plymouth home and away this weekend, with the Devils at Armadale on Friday. That means Ryan Fisher is back!

The hero of our trophy winning years 2008-2010 hasn't ridden at Armadale since then due to fixture clashes but he is looking forward to crossing swords with the top home riders, who have been going so well at Armadale this season. And while we look forward to seeing the Fish again, of course we will also be watching a very powerful rider in his team mate Ben Barker, top PL rider of the last two years.

MICKY'S FOOT: Monarchs' plucky reserve Micky Dyer has been forced to bow to the inevitable and take a break from racing.

He will return when his left foot has healed. He has two broken metatarsal bones, and turned out to help the team last weekend, winning a vital heat 2 in last Friday's home match.

However a further crash at Glasgow and a visit to Hospital on Monday confirmed the injuries and the Monarchs' promotion agreed with Micky that it would not be wise to attempt to continue.

A replacement rider is being sought but for the weekend's matches, NL rider James Sarjeant of the Rye House Raiders will deputise.

FIXTURES: Progress has been made in rescheduling most of the outstanding fixtures caused by recent postponements.

The home programme over the next few weeks will be:

Special pricing, to be announced, will apply for the Saturday fixture.

Monarchs will travel to Rye House on Saturday 22nd September for the restaging of the PL match which was postponed recently.

The home match v Redcar and the away match at Ipswich, plus the cup semi-finals, have not been allocated dates yet.

MEETING SPONSORS: Sponsors of Friday's meeting are the Black Bull Inn, Mid Calder who will fill all three sections of the Armadale Hospitality area.

LIVELY DEVILS: Plymouth are not a team pressing for honours, but they are always welcome visitors because of the star riders in their team.

Ryan Fisher said "I'm really looking forward to Friday, seeing so many old friends again, it should be fun and I hope I get a good welcome".

Ben Barker will also fully test the home men, he is currently at the top of the Premier League Green Sheet averages and is also a key man for Elite League Birmingham in his doubling up role – something which has been denied Fisher.

Corey Gathercole has also had good meetings at Armadale. The remainder of the Plymouth side don't have outstanding records on the Monarchs' circuit but of course the Monarchs themselves field probably their most inexperienced reserve pairing ever in the absemce of Micky Dyer.

Entertainment should be top of the agenda on Friday – as it should every week.

LAST MEETING: Monarchs defeated Workington 52-41 last Friday, the first defeat for the Comets since they were beaten at Armadale three months earlier! Craig Cook and Andrew Tully both scored 12 points.

NEXT MEETING: The Scotwaste Monarchs race Rye House Rockets in a Premier League match at Armadale on Friday 3rd August.