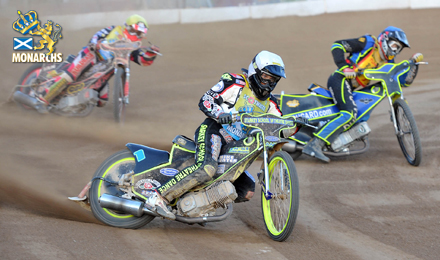 Plymouth should be one of the places where we are in contention for an away point, if we are ever going to get one, but after a disappointing display we were well beaten 57-36.

Our only success was Craig Cook, who started with a duck in heat one, then had two victories and a second place in heat 13 behind Barker, who he chased hard.

He was not at all happy to be knocked into the fence in heat 11 by a rash piece of riding by our old friend Ryan Fisher. Cook led down the back straight with Derek Sneddon also coming into the picture with a bold outside move, but Fisher's aggressive entry to the third bend sent Cook into the fence. The decision to exclude Ryan was correct.

Ryan said he thought there had been a passing opportunity, and refuted any suggestion that it was connected to his own heat 13 fall at Armadale. "I know that had nothing to do with Craig, that happened because Ben moved out. I never go out to knock anyone off and I don't have a problem with Craig."

Cook's kevlars and helmet were damaged but he escaped with a cut leg, and won the rerun, the best race of the night thanks to a great battle between Derek and Ben Reade.

Our gating was generally disappointing, and even when we did get our noses ahead, far too often our riders stuck slavishly to the inside line when there was a clear passing opportunity for anyone who was prepared to sweep out to the fence on the back straight.

We even held a 5-1 position in heat 10 through Theo Pijper and Matthew Wethers, but they held far too tight while Barker swept past with embarrassing ease.

Racing was generally predictable and apart from Cook, we put far too little pressure on the home men. Improvement will be required if we are to break our away duck.