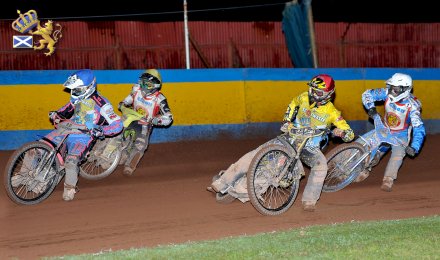 In a strange see-sawing match, the Scotwaste Monarchs almost blew an early 12 point lead before reasserting themselves to beat Leicester quite comfortably in the end by 55-38.

This moved Monarchs up to fourth place tonight, and they still have tomorrow’s match at Rye House, but they are most likely to finish fifth once Workington complete their home matches. The top three are now known – Newcastle, Scunthorpe, Somerset after tonight’s results. The Playoff groups will be selected on Sunday at the Premier League Riders’ Championship.

Over the first half of the match, the Lions were so much better from the start it was almost embarrassing. Monarchs cruised to a lead of 18-6 up to heat 4 but even in these races, the visitors were getting to the first bend ahead. They kept this going and improved their position dramatically, taking advantages by 7-2, 4-2 and 5-1 in successive heats to trail by just 23-22 at heat 7.

It was essential that the home gating improved, which it did eventually, and it was also true that Leicester didn’t enjoy a lot of luck. They lost two riders, Magnus Karlsson and Jari Makinen, before the end, and also blew a possible 5-1 in heat 8 when Graversen fell.

The home scorers in the end were as solid as ever, with another fine contribution from Aaron Summers who dropped just the one point. He also pulled off the best pass of the night on Lasse Bjerre in heat 10.

Theo Pijper had one bad ride but was otherwise unbeaten, and Andrew Tully eventually got his gating sorted out to finish with two fast wins. Derek Sneddon and Matthew Wethers were solid.

Mystery man Marcel Helfer had an impressive win in heat 2 but then faded and finished with a very slow ride in heat 12. It’s hard to work him out. Byron Bekker may only have scored 3 but again they were solid points, important at the time he scored them.

Magnus Karlsson’s problem actually came in his opening race, heat 4, when he made a good start but was knocked off by partner Lewis Blackbird who went in to the first corner too tight. A bit of quick thinking by Andrew Tully saw him lay his bike down just behind the fallers.

Magnus took a bit of a blow against the fence though, and after struggling round for three races he missed heat 13. He hasn’t decided yet whether to race in tomorrow’s match at Workington.

Jari Makinen proved a thorn in the flesh to Monarchs, picking up 7 points including a win over Summers in heat 6. He was gating well, and that was very important on a track left slippery after the heavy rain all day on Thursday.

Unfortunately the young Finn fell on his shoulder on the first bend of heat 9. He sportingly pushed his bike off the track and avoided a stoppage – if only everyone was so thoughtful – but he wasn’t able to race again.

Kauko Nieminen and Linus Eklof won two heats each for the Lions.

5-1s in heats 13 and 15 ensured that Monarchs won comfortably the end. We are at Rye House tomorrow for our last league match, then Theo Pijper rides in the PLRC on Sunday at Sheffield. Next week we will have our first Playoff matches, and Craig Cook will probably return having had a practise tonight.