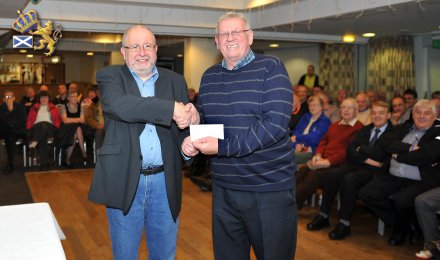 There was great news for the big crowd at Livingston tonight as Alex Harkess announced the continuation of speedway in 2013 at Armadale, the initial signing of Jozsef Tabaka for next season’s team and the belief of the club directors that the club is now on a stable footing for life beyond 2013.

Amongst a flurry of announcements, long time supporter Brian Gray was welcomed as new director of the Monarchs, and handed over his personal donation.

As has been stated a few times, a short number of weeks ago the club seemed to be in big trouble. There were debts from last season, and on top of that, in order to justify continuing the club needed not just to pay these off, but to build up a cushion against future adverse seasons, and work on cost-cutting to give the club a chance of breaking even on a week to week basis.

The response of the fans has been magnificent. Pledges made by supporters, many for £500 but also for smaller amounts, ensured that the first hurdle of paying the bills without eating into the season’s advance ticket money, has been achieved.

On top of that, five outstanding individual contributions were singled out. Special thanks were given by Alex Harkess to stadium owner Kenny Waugh and Derek Wilkinson of Duddingston Private Hire who have made substantial offers towards the goal of improving the week-to-week position.

Workington owner Laura Morgan, who has many friends at Edinburgh, and former Berwick rider Alan Hartley were thanked for exceptional donations, as was Brian Gray the new club director.

Scotwaste, team sponsors since 2006, have once again pledged their support. Adding all this together, the club feel justified in giving the green light to the club’s continuation.

The intention to set up a new ‘ideas’ committee was spoken of, this being made up of supporters a bit younger than the existing board. They will be asked to consider and come up with suggestions for improving publicity, sponsorship or any other aspect of the operation. In due course some of these may move up to join the board allowing older members to move on.

Several supporters paid up the pledges they had previously given, and the others will be asked to follow suit whenever it is convenient. Alex Harkess restated his personal gratitude to everyone who had contributed in this way.

Season tickets are now available and the following are the initial prices until December:

So that’s it, we’re up and running, the BSPA Conference is this weekend and team building will continue soon after. The Video Night is at the Thomas Morton Hall on 14th December at 7:30.