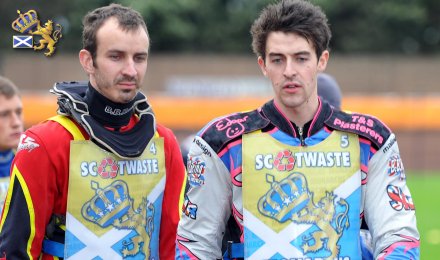 Club legends who might be visiting riders in 2013 Image Credit: Ron MacNeill

A full complement of Scotwaste Monarchs’ directors met on Wednesday night to make plans for the 2013 season in the light of last weekend’s BSPA Conference.

Brian Gray attended for the first time and also Douglas Newlands took a chair at the meeting for the second time recently, after finding it difficult to make the trip north from his base for a while. The group formulated some exciting plans for next season which will become apparent in due course.

Naturally the team for next season was on the agenda also and a general direction has been set.

We wouldn’t normally make any premature announcements until we had some more definite news, but of course the internet is a chatty place and already some news is out there!

Andrew Tully was not considered for a place in the 2013 team as he had indicated that he felt a loan move would be beneficial at this stage of his career.

The directors also felt that after ten mostly glorious years and a successful Testimonial, it might be time for a change in the case of Matthew Wethers also.

Both these riders will be allowed to move on loan, with the grateful thanks of the club for their superb contributions. We need hardly add that they are club legends in the eyes of everyone at Armadale and have been major contributors to the trophy-winning successes of recent seasons.

Both Kevin Wolbert, no. 1 in 2011 and a league winner with Monarchs in 2010, and Micky Dyer who joined last season, are also available for loan.